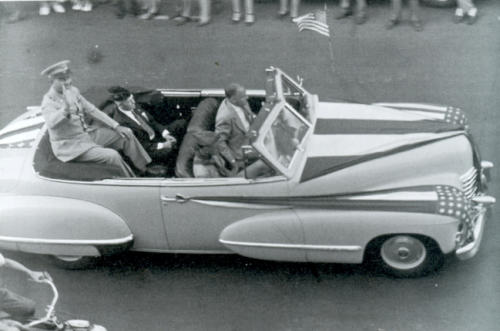 Gen. Jacob L. Devers receives a hero’s welcome back after leading two Allied armies in Europe in World War II. A York resident believes the Cadillac he is riding in was owned by his grandfather. This photo is part of the extensive Devers collection at the York County Heritage Trust. Also of interest:  Gen. Jacob Loucks Devers as a post-war celebrity: ‘I was very excited and proud to get his autograph’.

YorkTownSquare.com readers have many ways to deliver mail and tips to me – Facebook, Twitter, comments on this blog, email.

I love receiving and reading the mail and often share it with readers here.

Most come digitally, such as the recent one from York resident Mike Bowman. After reading my York Sunday News column about York’s Gen. Jacob Loucks Devers, he wrote (excerpted here):

What was of particular interest to me was the photo.  I have a framed copy of the exact same picture along with another from a different angle but I did not know who was being honored until now.

The driver and owner of the car was my grandfather, R. W. Bowman.  I believe the car was a 1942 Cadillac which he purchased soon after WWII began and was one of the only Cadillac convertibles built as 1942 models before the factories were converted to production for the war effort.

I can remember being told that since it was so rare, he had received calls from Hollywood movie producers wanting to purchase the car to be used in movies and offering quite a bit of money for it.  He refused to sell it to them because at the time he did not know when he would be able to replace it with a new one!

He owned and operated RW Bowman GMC which eventually became RW Bowman & Son, Inc when my dad got out of the Army in 1945 and eventually carried several vehicle franchises including among others Packard and American Motors products.

My grandfather died in 1966 and my dad retired in 1986, the same year my brother and I merged our dealership with Jack Giambalvo Motor Company.

And that is the rest of the story.

Your well summarized information on General Jacob Devers came, for me, at a very appropriate time.  Saturday evening (10/3) a friend & I were having dinner with a couple whom we know.  He (of the couple) is very much interested in military history & especially that of WWII, although he had never heard of General Devers (he is so neglected by historians, as we know).  My friend & I will be sending your article to our friend from the Hanover area as a splendid way for him to become acquainted with General Devers.

Roy, a frequent correspondent, lives on Devers Road. “(S)o I should be interested in getting the General out of the rubbish heap of history.”

I should point out two things.

First, my York Sunday News piece was largely a Q & A with Devers expert Rich Robinson.

Rich will be a panelist at an upcoming York County Heritage Trust symposium about Devers: ‘A Quiet Streak of Lightning.”
+++

Some mail raises interesting questions that I can’t answer. This is one, who believes that a Titanic survivor lived in York, and pointed out that I missed mentioning her in this post on local connections to the ill-fated ocean liner:

“Emily Badman lived there breifly in York, PA but settled in NJ,” the emailer wrote.

If you can connect Emily Badman to York, please comment below.