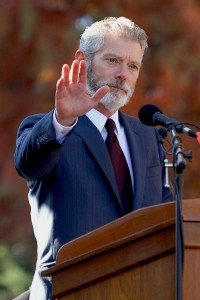 Noel Kline of Spring Garden Township submitted this photo to the Daily Record/Sunday News online News events gallery. The York County, Pa., photographer writes: ‘Actor/playwright Stephen Lang was the keynote speaker at the 148th Anniversary of Lincoln’s Gettysburg Address Saturday at Soldiers’ National Cemetery.’ A large crowd heard Lang speak on Saturday, Nov. 19, the actual anniversary of the famous address. Lang played Confederate Gen. George Pickett in the film ‘Gettysburg’ and Confederate Gen. Stonewall Jackson in ‘Gods and Generals.’ Pickett’s brigade sustained massive casualties in Longstreet’s Assault on the third day of fighting in the Battle of Gettysburg. That assault is also known as Pickett’s Charge. In portraying Pickett and Jackson in successive Civil War movies, Lang faced the challenge of playing one of the most inept and one of the most capable Confederate generals, respectively.Also of interest: George Armstrong Custer – and his horse – left legacy in York County and Steven Spielberg scouts Gettysburg for Abe Lincoln film: ‘Thank you for keeping our history’

Over at York City Limits blog, the installation of new signs in the architecturally diverse northwest York neighborhood –  The Avenues – is covered with a story and photographs.

Some nuts-and-bolts info from The Avenues Neighborhood Association:

“The signs are brown, which designates a historic area, and they contain an image of a Victorian house. The signs were purchased with a grant obtained by the Avenues Neighborhood Association from Resources for Urban Neighborhoods (RUN).  RUN is generously supported by the York County Community Foundation and the Women’s Giving Circle.

“The Association partnered with the City of York’s Department of Public works which provided the in kind contribution to install the signs. In addition to the City, the Association solicited input from residents and businesses in the area for the sign project. The intent of the project is to serve as a catalyst for promotion of more community involvement and increased awareness of the historic nature of the neighborhood.

“The Avenues Neighborhood Association plans to raise money for additional signs throughout the neighborhood with a home tour in 2012 featuring homes in the neighborhood constructed in the early 1900’s, mainly in the Prairie architectural style.”

Historian passes away: Byron Reppert, historian/mayor of Mechanicsburg, right across the York County line in Cumberland County, has died.

Forum of the day: On The Exchange, people are providing their memories of York County Judge Chuck Patterson, who died this week. Also, see Facebook commenting at the bottom of the York Daily Record story about Judge Patterson’s death.