Growing up in York County, Pa.: No TV. No Internet, no phone. But she had her newspaper. 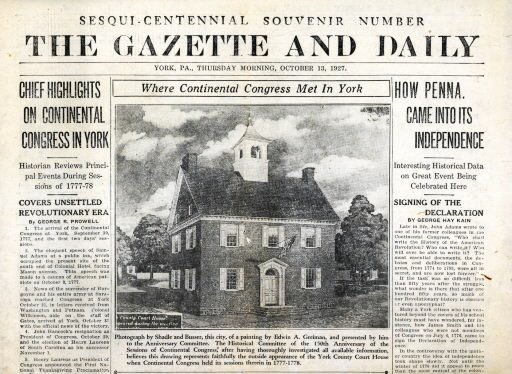 This is the newspaper that Lois ‘Jane’ Gentzler of East Prospect, Pa., grew up with. This Oct. 13, 1927, edition spotlights the 150th anniversary of the adoption of the Articles of Confederation in York. Continental Congress met in the Colonial Courthouse, featured on the front page, for nine months. The newspaper, known for its tabloid format by many today, was a broadsheet until 1943. It converted to a tab in 1943 to save newsprint in World War II, and switched back to broadsheet in 1973. Also of interest: Sixty years ago, Dem upset GOP incumbent for York County congressional seat and York, Pa., publishing legend J.W. Gitt vocal about nuclear power and Cartoonist made York newspaper owner’s views an art form

A great letter about York County life and the news business, which will accompany my York Sunday News column (7/10/11) … .
“Mr. McClure,” Jim Gentzler wrote. “My Mother, Lois ‘Jane’ Gentzler recently told me a story that I thought may have some interest.”
Born and raised in York County, 16-year-old Lois traveled by bus from East Prospect to William Penn Senior High School.
Each morning on this trip to school, she read The Gazette and Daily, predecessor of the York Daily Record.
“No TV, Internet, and even no phone at that point, she learned about the world through your newspaper,” Jim wrote in an email… .

Sixty-seven years later, she starts her day with the Daily Record, her primary source for information about the world.
More of the story from Jim:
“I believe you could count on both hands the number of days she has NOT read your paper each morning. With the advent of online newspapers, I believe she will be one of the last to hold out reading and ‘touching’ the actual newspaper each morning .¤.¤. a tradition I know I will remember about her long after she is gone.”
Well, the newspaper remains the bell cow — and will remain so for the foreseeable future. And that newsprint cow has produced a small herd of frisky and playful online bulls, steers and heifers, most dependent on mama.
So Mrs. Gentzler, indeed, will have a newspaper to enjoy in her many remaining years.
Now for the rest of Jim’s story about his mom:
“I recently ‘moved’ a few sections of ‘her paper’ that was on the floor next to ‘her chair’ and I was rebuked for ‘touching’ the only thing she has left in her life .¤.¤. her newspaper!”
Also of interest:
– Continental Congress struggled into York, and delegates strutted back to Philly 9 months later
– York, Pa., newspaper’s founding date remains a mystery.
Archives:
– All York Town Square posts from the start. (Key word search by using “find” on browser.)
– Of course, you can always search for York Town Square posts on Google. For example, search for yorktownsquare and J.W. Gitt and you get this.