Solomon Meyer founded Die York Gazette, but his newspapering went downhill from there 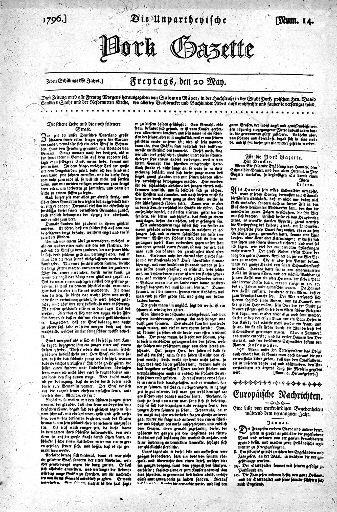 This May 20, 1796 edition, is the earliest extant version of Die York Gazette, an anti-Federalist publication that also reflected the dry humor of the Pennsylvania Dutch. It tells about brewer Hannes’  bout with an old hermit. Hannes produced a beer that stopped headaches, created a good appetite and took care of constipation. Now the old hermit, Hannes’ neighbor, had seven pairs of old leather breeches, some that had not been washed for up to 15 years. The hermit mistook Hannes’ brewing vat for a laundry. He didn’t want to be too uncouth, putting one pair in the first brew, another in the next and so on. ‘But heavens above!’ Die York Gazette reported. ‘(T)he story came out, and Hannes lost the title of Doctor, and his famous small-beer acquired the name of breeches-water.’  The German-language newspaper was decisively political, and that focus helped get its owner, Solomon Meyer, into trouble. Also of interest: How Die York Gazette and its successors have viewed political races through the ages.

“He usually arrived with a ramshackle printing press,” he wrote, “and the traditional shirt-tailful of type to establish the first newspaper in the community … .”

That was Meyer, publisher of  the German-language newspaper that is viewed as the earliest predecessor of the York Daily Record/Sunday News.

His four-page weekly newspaper was politically pointed in the anti-Federalist direction and captured the earthy humor of his Pennsylvania Dutch readers.

Newspapers, like people, are known to have black sheep in their family trees. Solomon Meyer was  a rascal or worse, as we shall see.

Breaking: @Gannett has acquired the York Daily Record and several other media properties from Digital First Media. More to come.

Solomon Meyer’s achievement in founding of Die York Gazette about 220 years ago came to mind recently when we were preparing coverage of the sale of the York Daily Record/Sunday News to our new owner, Gannett Co. Inc.

And our new owner has operations in 92 U.S. markets. It’s the No. 1 news media company in America. Our former company, Digital First Media, was No. 2 by some counts, so the York Daily Record/Sunday News understands – and enjoys – what partnerships mean within a large company.

Just days in, we’ve caught a glimpse of the bright future that a company increasingly focused on the digital and print news business offers.

She asked for coverage plans. The story appeared in USA Today and throughout Gannett’s major news distribution network.

Which reminds me of a lament from a community leader from about a year ago. After some  bad news event came out of York , he complained that the city again had made the national news in a negative way.

That might be the case if you  only account on one side of the ledger, but a national network gives an opportunity to share stories about a York countian who had overcome a rare disease. Or the successes of John Kuhn, Bruce Arians and other sports stars with county ties.  And, yes, the big news when, say, York becomes an example of a city that leverages its arts scene to score a downtown renaissance.

One idea behind thorough reporting is to find positive deviants, meaning examples of people who achieve despite facing the same uphill battle that others are fighting.

So if a grade level in a failing school does better in standardized testing than its peers, a story could emerge about what those teachers are doing right.

Then, the second example:

Gannett sent scores of journalists to Investigative Reporters and Editors’ annual conference in Philadelphia last week. The company is all about watchdog journalism, also a longtime value at the York Daily Record.

Today, our journalists tease information from government databases, train on  interactive digital graphics and search obscure websites for York countians who have broken the law.

We sent two journalists to Philadelphia, and they attended sessions on investigative reporting offered by Gannett on top of the full schedule that IRE offered. There, you could see national projects Gannett had in its scope that will be offered to the York Daily Record and other markets to localize with stories from our community.

A strong impression emerges about Gannett:

The company believes in journalism with impact and offers extensive training so its journalists’ work has a strong effect. The York Daily Record/Sunday News’ journalism lines up squarely with Gannett’s.

When I thought about the growing sophistication of  journalism and the news business today, I contrast  that with the rudimentary and highly partisan practices of Solomon Meyer.

He and  Gazette benefited from political patronage. He gained a political position, for example, as brigade inspector for militia in York and Adams counties. That position drew the wrath of a newspaper – and political – competitor.

According to Klinefelter, The York Recorder reported: ‘That this fellow has as little knowledge of military affairs as a jackass dancing, must have been well known to our Patriotic Governor.”

As I said, Meyer was a rascal and more, and soon he was suspected of taking militia funds. This led to his departure from town.

As Klinefelter described it in what has become one of my favorite quotes from York County history, “He eventually forsook the publishing business and betook himself elsewhere.”

The news business has come a long way since the days when Solomon was so unwise.

With the watchdog emphasis and training from our new owner, we’ll be equipped to expose wrongdoing of modern-day rascals and thieves who continue the tradition of  Solomon Meyer, brigade inspector.

Sometime in the 1970s, these filing cabinets were moved from the York Daily Record to the York County Heritage Trust, where they stand today in the Trust’s Clarke Avenue warehouse.  They contain carefully clipped and filed stories from The Gazette and Daily from earlier in the 20th century. Today, past stories are stored digitally, and such filing space is unneeded in the York Daily Record newsroom. Check out this timeline of the York Daily Record/Sunday News and its predecessors.