GameTimePa.com crosses the Susquehanna and expands to the Pa./N.J. line 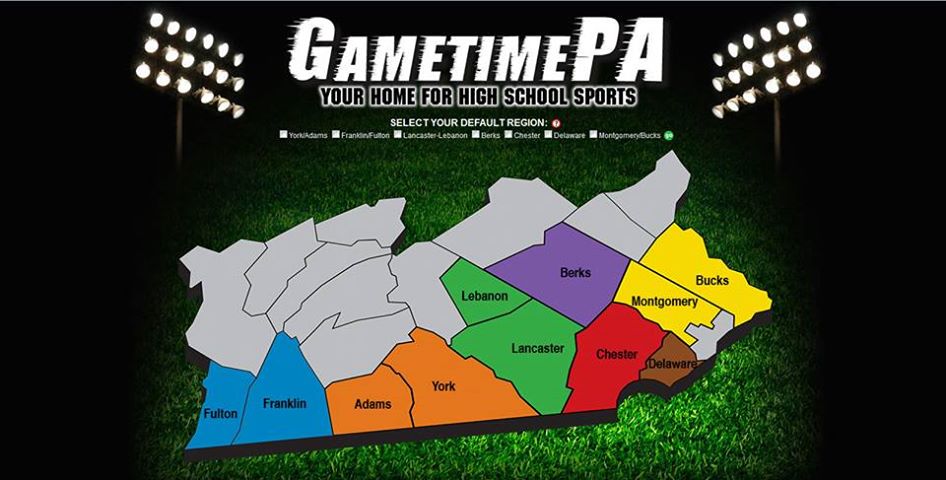 GameTimePA.com’s prep sports coverage swath includes the southern part of Pennsylvania from Fulton County in the west to Bucks County in the east. The website, founded in 2008, expanded this week with the handshake of sister newsrooms in 11 counties in southcentral and eastern Pennsylvania. This expansion will go on the YDR’s timeline of historic events. That timeline goes back to 1796.  Also of interest:  Web, mobile, tablet technology causes revisions in York, Pa., news media history.

History enthusiasts, primary readers of this blog, love newspapers. Many depend on this first draft of history so heavily.

So we keep you up to date with my York Sunday News columns about what’s going on at the newspaper and its assortment of digital offerings.

Here’s the column running Sunday, telling about how the work of a newsroom seamlessly crossing traditional York County borders in digital form:

A well-meaning newspaper reader, bearing a sympathetic look, told me it’s too bad that the newspaper is going out of style.
I replied that he might be right in his concern if we based our franchise’s future solely on the newspaper. But clearly the print edition is not all we do now and far from all we will do in the future.
Much of our newsroom’s work is devoted to building digital audiences and publish digitally as soon as stories are ready – what we call digital first. That content is then available to the newspaper, making that content better, too.
Our newspaper particularly appeals to readers with some seasoning, while our deep digital content hits all age groups. Most businesses place their advertisements in print and digital. They have good options.
We’re expanding in the present and poised for the future.
So there’s no reason to lament our future.

You certainly find a spirit of the chase in the newsroom at the York Daily Record/Sunday News.
We are following a path to the future, particularly well tended at this moment with the expansion of our GameTimePA.com prep sports website.
For about two years, the four newsrooms in the York cluster — the YDR, Lebanon Daily News, The (Hanover) Evening Sun and Chambersburg Public Opinion — have traded stories and photos with six sister daily newsrooms in suburban Philadelphia.
Actually, it’s more than six. We have sister weeklies in many towns ringing Philadelphia.
This year, all these newsrooms are contributing sports coverage for 150 high schools to GameTimePA.com.
That means stories, photos, a live scoreboard, livestreaming videos, short videos, photo galleries, social media sites, mobile apps and more.
To make this handshake work, we had to find a way to cover Lancaster County, where our company — Digital First Media — has no newsrooms.
Or maybe I should say, had no newsrooms.
We put a sports reporter in Lancaster, which shores up our Lancaster-Lebanon League coverage and gives us continuity between York and Chester counties.
We made a bit of history here. Lancaster-based news organizations have covered York County. But it’s been rare — if not unprecedented — for a York newsroom to cover Lancaster.
+++
As I told my sympathetic friend, putting content on the Web and other digital platforms frees us up from the costly limits of newspaper delivery.
Our audience can extend across county borders — and even country borders.
So we can explore new coverage opportunities previously not open to us.
Of course, residents of York/Adams remain our primary audience.
But the digital world enables us to take paths not well worn or traveled at all.
Which leads me to a conversation with a second person, involved in public relations in the community.
I invited this professional to one of our popular “How to get it Published” seminars.
The PR practitioner declined to attend, saying she already knows how to get it published in the York Daily Record.
Maybe that was true about our print edition. But the York Daily Record is vastly more than our still-very-important newspaper, as our 11-county GameTimePA.com website indicates.
We’re a multimedia company that is constantly expanding in the way we deliver news and photos to readers.

A bit of sports history … .