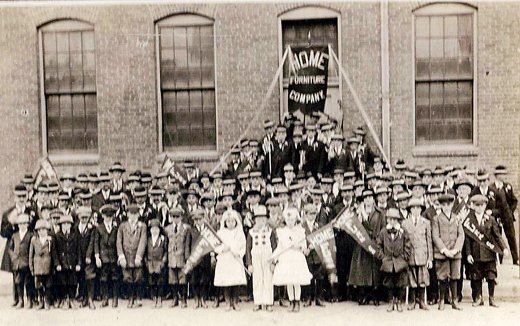 York, Pa., rallied with the rest of the world when World War I, the Great War, ended. This Ready for Peace Parade photograph is dated, Nov. 11, 1918 – Armistice Day. It shows young Home Furniture Company reps outside their plant on East Princess Street at the Maryland & Pennsylvania Railroad crossing. York Sunday News’ Gordon Freireich received this photograph from a reader, Diane Klinedinst, and turned it into a column on York County’s considerable furniture-making industries:  ‘Opening a door on York furniture manufacturing.’ Posts about furniture manufacturing and other types of woodworking industries in York County draw interest from readers when published on yorktownsquare.com or in the York Daily Record/Sunday News. York-made tables and bedroom suites remain in use around the world. Also of interest: Family member would like Boring Furniture Co. of North York, Pa., to be remembered and Red Lion’s Ebert Furniture: From bedroom suites to gunstocks and York County, Pa., lacks brainpower, researchers say. But here’s the rest of the story.

“Since I’m on a strict no salt diet we do have to do things a little different. First order sausage meat with no salt from Wayne Nell In East Berlin since his Is above all others.

“Then since the hog maw Is cleaned using salt It needs to be soaked for several days changing water several times. Our family has always followed the German purity law – we use only meat, potatoes, onion and parsley. Nix Besser!”

Creating community: Blake Stough over at Preserving York is doing a great job creating community in the historical community in York County. His most recent post reflects on the past year and looks ahead to new features he’ll add to his blog in 2012: “In the upcoming year, I pledge to my readers that I will continue where I left off, and work diligently to bring you interesting and educational stories.”

Interestingly, another Preserving York post thoroughly covers one of the community theaters no longer operating – not far from the closing Blockbuster store in Hanover. And another covers a second Stough tattoo – showing York’s old Zion Lutheran Church.

For info in the first tattoo, check out York Town Square post: Here’s a colorful way of Preserving York.

Blog post of the day: Cannonball’s Scott Mingus tackles the fascinating topic of: Military Ballooning. That will be the topic at the upcoming meeting of the Harrisburg Civil War Round Table.

Forum of the day: Exchangers love this category for commenting – York’s Famous Music Groups and Bands