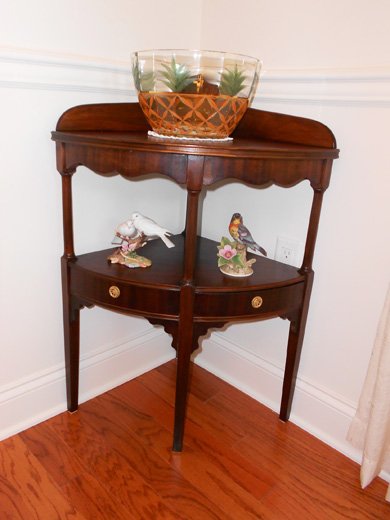 Phyllis Parisi has sent along a photography of a table – mahogany, she thinks – that was made by Boring Furniture Co. of North York. She’s wondering about its approximate age. ‘I plan to clean it up and keep it for myself in my dining/living room for all to enjoy.’ She did so, and that’s where this photograph was taken. ‘I’m really enjoying the table and learning its roots,’ she wrote. If you have information on the table, contact Phyllis: (See additional photograph below.) Also of interest: Family member would like Boring Furniture Co. of North York, Pa., to be remembered.

Several folks emailed me last night after seeing the WITF video “Nine Months in York Town,” based on my book by the same name.

“That was the second book/video combo tied to a community celebration,” I wrote on Facebook mail. “The first was Never to be Forgotten, linked to 250th of YC in 1999.”

“Ten years ago! Time flies. You did look younger,” my FB friend wrote. 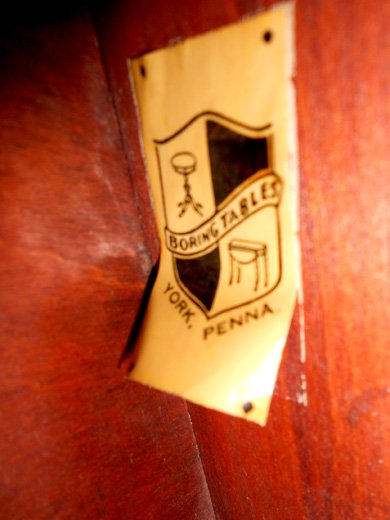 Phyllis Parisi discovered a label on a table she purchased at an auction that gave away its maker, Boring Tables, York, Penna. Also of interest: Furniture making in York County fascinates folks, Part I.

Where technology meets nature – Check out this interesting story about the Conowingo Dam area of the Susquehanna River: Lower Susquehanna fascinating for hydroelectric dam, fish, eagles.

Reenacting history: The reenactment at Gettysburg this weekend will be followed by lots of media, getting fresh video in preparation for the 150th anniversary of the Battle of Gettysburg next year. Don’t forget to follow four journalists, including yours truly, as we live tweet one of the battles on Saturday.

Forum of the day: Exchangers are discussing the Christian Science Monitor’s recent list: 100 best books of all time. Here’s a tease. No. 1? “Things Fall Apart” by Chinua Achebe.