From then until now, York Fair book tells about family fun since 1765 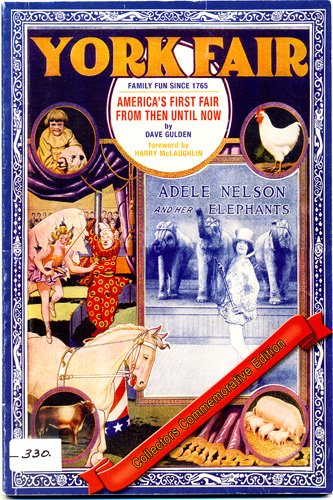 The cover of Dave Gulden’s ‘York Fair: America’s First Fair From Then Until Now’ pretty well is indicative of its contents. There’s a lot of content about the biggest and the best and the unusual and, well, the freakish. The book can be ordered via Gulden’s website: Old Time York. Also of interest: Remember these about the York Fair? Bungee jumping, baked potatoes and baby chick births.

Dave Gulden’s 2005 paperback booklet on the York Fair contains all kinds of facts and stories, some tied to big and weird things.

– In 1888 – the fair’s first year at the west York fairgrounds – 950 dishes were on display at the Horticultural Hall. Of that bounty, 529 were apples and 178 were grapes. A turkish crown pumpkin got particular  attention. “A plate of cucumber pears was a 1889 curiosity,” Gulden wrote.

– In 1937, a purebread Belgian stallion weighing 3,030 pounds and 19 1/2 hands gained attention. It took 30 inches of iron to make one shoe for this reported largest horse in the world.

– The 1903 fair featured the reported heaviest man in the world, Phil Kreigh, weighing in at 712 pounds.

– And in 1942, The Gazette and Daily reported about a new fad for ladies: “Many women were seen on the grounds yesterday wearing slacks – a fad made popular generally since the start of the war, but which originated several years ago in Hollywood.”

And here’s a sampling of some more history:

Teddy Roosevelt at the York Fair: ‘I know York county farmers are prosperous. Their barns are bigger than their houses’.
This York Fair mural is fading from sight .
Good old days at the York Fair were at least old.
JFK received grand applause at York Fair visit.
Young curators produce York Fair exhibit: ‘A Fair of Our Own’.
All’s Fair blog gives all kinds of insight about York Fair.
Both Yanks, Rebs camped at old York Fairgrounds.
‘The lower she sank in her chair’.

And here’s a popular post: Which acts played the York Fair the year you were born?

To read about the 2011 York Fair, visit the All’s Fair blog.