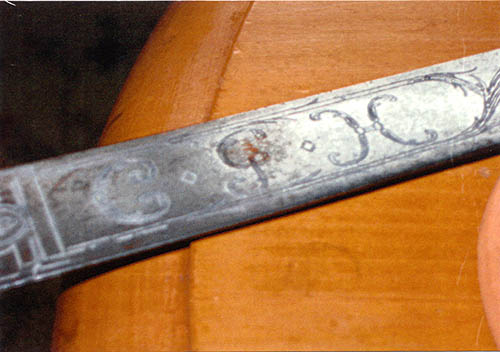 York, Pa.’s, Dick Wilson brought photos of this sword to the York Daily Record/Sunday News office. It has has been in his family for years. Family lore has it coming from the battlefield in Gettysburg. He believes it to be a cavalryman’s sword and the initials appear to be C.J.H. If he could find a descendant of the swordsman, ‘I’d give him the sword.’ If you know anything about this weapon, please comment below. Also of interest: Gettysburg 150: Top 5 picks of all photo, video, story coverage. 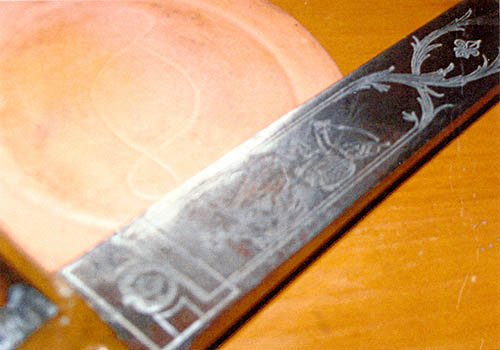 This decoration appears to be a soldier on horseback. Dick Wilson also has a Eli Whitney six shooter in his collection, also believed to have come from the battlefield.

Pat Long offered a different perspective to Gettysburg 150, in her response to my Facebook question about her favorite moment:

“I did not. Glorifying a war in which almost as many people died in three days as in the entire Vietnam war is not something I want to be a part of. Unfortunately, war is good for business, and this one is still a money-maker. Seems to me that all the energy, effort, time and money put into this celebration of killing and suffering would have been better used in contemplating alternatives to war and helping the homeless and needy veterans of present wars we have among us here in York and Adams County. I found this whole extravaganza sad and discouraging.”

Actually, I found much of what was happening in Gettysburg was educational, more than celebratory or promoting pageantry and the trivial. But I certainly do respect Pat’s point of view.

He also wrote about a relative who fought at Gettysburg: “… Lt. John T. Miller, 149th PA Vol., Company ‘D’, was hit in the jaw by a bullet during the second charge towards the railroad cut. The charge started from the vicinity of the memorial to the 149th. As you probably remember, John T. Miller was my Great great grandfather. He survived the shot and died in Duncannon PA in 1873 being the sheriff of Perry County.”