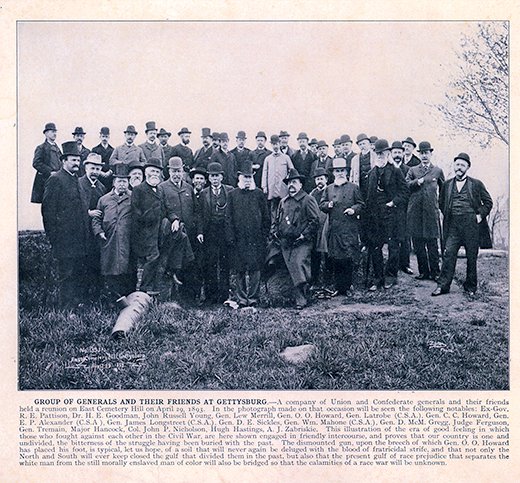 York, Pa.,’s David Spangler mailed this photograph, source unknown, of Union and Confederate generals who had gathered in Gettysburg 30 years after the great battle. It’s a little hard to sift the generals from their friends, but well-known generals E.P. Alexander, James Longstreet and Gen. Daniel E. Sickles are shown. Gen. O.O. Howard can be identified, his peg leg on the cannon. The captions states: ‘The dismounted gun, upon the breech of which Gen. O.O. Howard has placed his foot, is typical, let us hope, of a soil that will never again be deluged with the blood of fratricidal strife, and that not only the North and South will ever keep closed the gulf that divided them in the past, but also that the present gulf of race prejudice … will also be bridged so that the calamities of a race war will be unknown.” Also of interest: 5 Gettysburg 150 moments not to be overlooked.

The photo of generals and their friends interests David Spangler because it shows “living faces” of officers who participated in the Battle of Gettysburg July 1-3, 1863.

“Many participants in the group still retain their facial appearance of three decades before,” he wrote, “not as elderly gentlemen most of us have been accustomed to seeing in history books.”

The caption bears a point of view that caught my eye.

Today, some people minimize that slavery – and race – were primary factors behind the war. This caption, whatever its ambiguities, refers to the conflict as a “race war.”

Proof? How many non-blacks were in bondage as chattel slaves in America in the 1850s and 1860s? Only blacks were treated as property.

Check out these yorktownsquare.com stories and photographs about the Civil War.