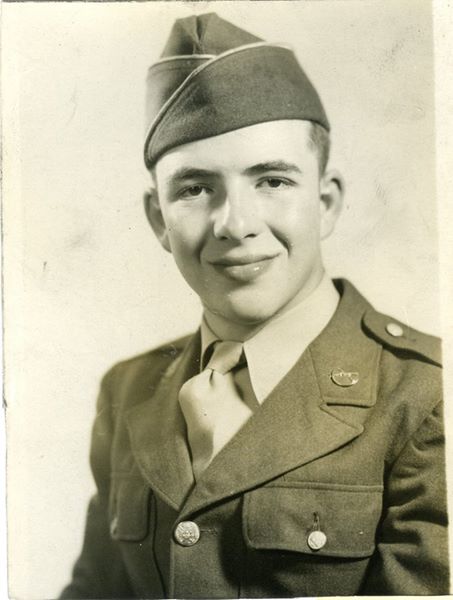 “Flags of our Fathers” was a compelling movie, as memorable as “Saving Private Ryan.”
Two related things stood out in this film based on the Battle of Iwo Jima in 1945: First, the film accurately captured the youth of the fighting men. And it gave a glimpse of the pain, fear and danger faced by these young men.
As the son of a soldier seriously wounded on subsequent fighting on Okinawa, the film gave me a glimpse of what an 18-year-old fighting on a remote Pacific island faced. And the terror of being wounded. And uncertainties while facing evacuation.
I wrote my father’s story in the foreword to my World War II book “In the Thick of the Fight.” I repeat an edited version here, as a Veterans Day salute to him and all who have fought in America’s wars… .

The teenage Pennsylvania soldier dug a foxhole in the backside of a hill on Okinawa in April 1945. His mission as a member of a mortar squad in Co. E, 307th Infantry, 77th Infantry Division was to provide cover fire for riflemen as they advanced over the rise to force Japanese foes off the next hill.
Early the next day, the offensive began. But something clearly went wrong. White phosphorous shells began landing in the soldier’s position — from the rear.
Friendly fire.
Those shells were intended for the next hill, to set up a smoke screen for the infantry. The semi-solid white phosphorous sprayed over the soldier, immediately burning and smoking on contact. It covered the soldier’s face, hands, legs and back. Somehow, his helmet protected his hair and eyes.
The soldier and the rest of his squad, all burned, were evacuated to a field hospital, five miles behind the lines. That night, “kamicraze” pilots, as soldiers called them, targeted ships in the harbor. Some were shot down, others found their marks.
At times, the soldier took cover in caves that served as tombs for the Okinawans.
Less than a year before, the young man had sat at his desk in a Pennsylvania high school. Now, on the other side of the earth, the badly burned 18-year-old lay in a cave listening to suicide bombers screeching toward floating targets.
The wounds healed slowly, but he recovered enough to return to his unit at Cebu in the Philippines. It was August, and the war was just over. Atomic bombs on Hiroshima and Nagasaki took care of that.
Only about 20 percent of his original company was there in Cebu. Most had been killed in action on Okinawa.
Friendly fire had probably saved the soldier’s life.
“I believe the Lord had a hand in this,” he later wrote, “and I have thanked him many times since.”
The soldier returned home and married. That soldier is my father, Robert E. McClure III. It is to him and my mother, Betty Pebley McClure, formerly of Brandenburg, Ky., and now York residents, that I dedicate this work. Like many of his fellow fighting men, he seldom talked about those horrid experiences 60 years ago. Now thousands know.
But most importantly, my prayer is that this soldier’s grandchildren would understand the faith and sacrifices of their grandparents.
And my hope is that readers of this work would better understand what it meant to be in the thick of the fight.

Also of interest: All World War II posts from the start