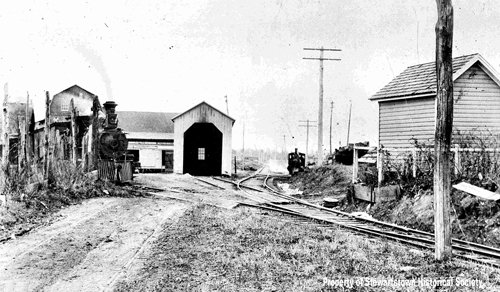 The Stewartstown Railroad experienced an accident in 1923, the worst in its history dating back to 1885. With multiple railroads crossing York County, its rail history is filled with accidents (The Great Watermelon train wreck) and near accidents (The unsolved mystery of locomotive No. 1689). Background posts: What was it like aboard the Stewartstown Railroad?, Whatever happened to York County’s Hungerford? and Is mystery railroad the old Shrewsbury narrow gauge?

One day in 1923, a car carrying several passengers and crew members becomes uncoupled from a train on the Stewartstown Railroad and drifts down a grade.
A freight train, going at a rapid speed, meets it head on and plows through the passenger coach “telescoping” about two-thirds of the length of the car… .

Four women passengers are scalded and burned when thrown against a boiler, and two men are treated for cuts and bruises. The engineer of the freight, Lewis Roseberry, is injured when he jams on the brakes and jumps from the train.
That account from “Never to be Forgotten” is the most dramatic incident on the otherwise sleepy Stewartstown Railroad. In its heyday, the shortline picked up and delivered agricultural products from Fawn Grove to its terminus at New Freedom on the Northern Central Railroad.
Today, efforts are underway to rehab the still-intact, but deteriorating rail line.
Writer Eugene Paik tells about those efforts in a York Daily Record/Sunday News story (6/15/08):