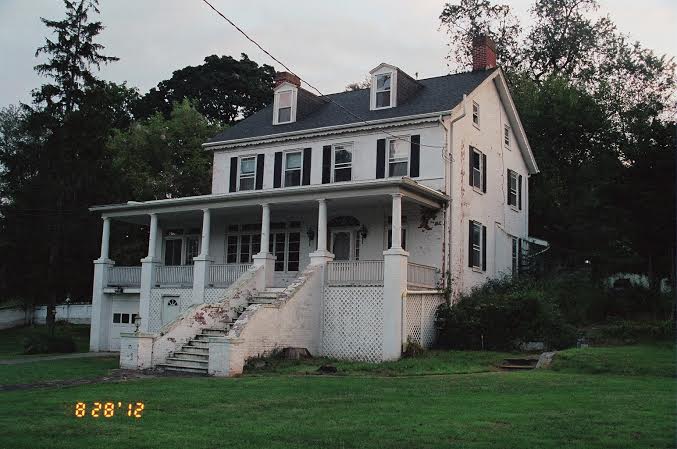 John ‘Otts’ Hufnagel photographed this house in Glen Rock-area’s Foustown on the day that the nearby distillery stack came down in 2012. The stack, which marked the old distillery town, was built to make alcohol in World War II, but was never used. Hufnagel sent the photo in response to a reader request about this southern York County ghost town. Also of interest: Spirits put Foustown on the map.

A reader emailed recently with a query about one of York County’s most intriguing places, the former company hamlet of Foustown.

Here’s his question about this ghost town:

Foustown is shown in this advertisement. Today, little is left of this former company town. Also: Learn about a Prohibition-era raid on this rural community.

“Do you know if the old personal residence of John or Billy Foust is still standing? If so, what is the address?

“There are some very old homes at the intersection of Foust and Distillery, including a large plantation style home from 1860 with a grand entrance. I was wondering it one of those homes could have been the distillery owners personal residence.

“If we look at the drawing from that era, it would have been the house next to the fountain.”

Since this Foustown – one of at least two in York County – is near Glen Rock, we turned his question over to the expert about those parts: John Hufnagel.

“Not sure if John Foust’s residence is still standing as I think it was beyond the distillery going away from Glen Rock. Billy’s house … is standing … . There are 2 or 3 houses Billy built for employees or family still standing and occupied.”

Of course, one’s interest in Foustown can go well beyond its ghost town status. It’s an example of an agri-business, the opportunity to turn grain products into alcoholic beverages. So it took the products of the land and added water from the nearby stream to make spirits to be exported from York County.

It was a way of life – and a cash crop – in agricultural York County.