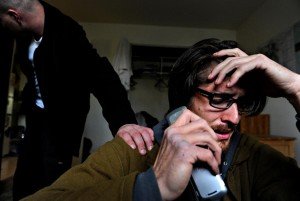 Denver Post Pulitzer Prize-winning photographer Craig F. Walker is a York Suburban High School graduate. And the war correspondent continues to do great work – and collect awards – for his work out west. This photograph is a piece of his current project, ‘Welcome Home, The Story of Scott Ostrom.’ This caption accompanies Craig’s photos: ‘Scott is comforted by a friend during an argument with his girlfriend over the phone. Sitting on the bed, he started crying, later comparing the relationship to the stress of combat. “Sometimes I get into fights. It’s not a talking thing for me. I handle it like a Marine, like it’s a combat situation,” Scott said. “Being diagnosed with PTSD is an interesting thing. … It means I have nightmares every night. It means I’m hyper-vigilant – means I’m weird about noises in the middle of the night and lock my doors. It means I have no fuse and if I get attacked, I’m going to kill. … I don’t want to feel this way.” ‘ (Click on photograph to enlarge; see second photo below.) Also of interest: Two award-winning Iraq War correspondents come from York County.

This description accompanies a gallery of his work:

“After serving four years as a reconnaissance man and deploying twice to Iraq, Brian Scott Ostrom, 27, returned home to the U.S. with a severe case of post-traumatic stress disorder. ‘The most important part of my life already happened. The most devastating. The chance to come home in a box. Nothing is ever going to compare to what I’ve done, so I’m struggling to be at peace with that,’ Scott said. He attributes his PTSD to his second deployment to Iraq, where he served seven months in Fallujah with the 2nd Reconnaissance Battalion. ‘It was the most brutal time of my life,’ he said. ‘I didn’t realize it because I was living it. It was a part of me.’ Since his discharge, Scott has struggled with daily life, from finding and keeping employment to maintaining healthy relationships. But most of all, he’s struggled to overcome his brutal and haunting memories of Iraq. Nearly five years later, Scott remains conflicted by the war. Though he is proud of his service and cares greatly for his fellow Marines, he still carries guilt for things he did — and didn’t do — fighting a war he no longer believes in.”

Some local organization should invite Craig back to share his photographic work with his hometown. 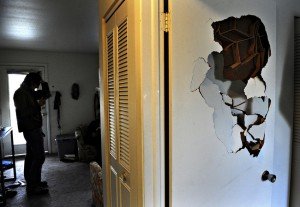 The caption with Craig F. Walker’s photograph: ‘After punching a hole in his apartment door four times, Scott stands in his living room. “My PTSD comes from long exposure to combat trauma,” Scott said. “I think it comes from the fact that I survived. That wasn’t my plan. It’s an honor to die for my country, but I made it home.” ‘

Looking to like something? – Have you seen the Penn Street Farmers Market’s new Facebook page? York’s oldest markethouse’s FB page has an interesting drawing of the now-demolished City Market House on there. Lots of other interesting stuff, too.

In need of a new home: Hanover Shoe Farms, that breeding ground for trotters in York County’s southwestern corner that fascinates people, is looking for people to provide homes for rescued horses.

Picking spot identified: The York Daily Record/Sunday News’ Lauren Boyer identified a site fit for picking, by the American Pickers, that is. Here’s hoping they pick in York County during their upcoming Pennsylvania trip.

York Town Square poll: The threatened Hoke farmhouse has been in the news. Vote on your favorite option or comment below:

What would you do with the landmark Hoke farmhouse in Spring Grove?