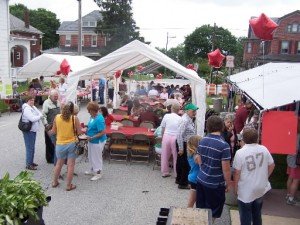 A popular annual event – for 40 plus years –  is the annual strawberry festival each June at Christ Lutheran Church in York Township’s Spry. The event serves as a reminder of Spry’s rural past. The village grew after trolley service operated in the first third of the 20th century. Another big event involving this community bordering Route 74 south of York is planned for this year: the 100th anniversary of Spry Grammar School. Also of interest: Where does the York Township village of Spry start? And stop? Depends on who you ask.

Former students of Spry Grammar School are loyal to their school, a landmark in this York Township community for 50 years in the middle of the 20th century.

And they have a special anniversary coming up.

Mike Grandia emailed with news about a centennial event later this year:

“Every two years the surviving students of this school hold a fall reunion in Dallastown.

“This year is the 100th anniversary of the founding of our school.

“I am in charge of putting together a book of memories to be distributed after the reunion.

“I am requesting a list of references regarding the history of this school: 1912 to 1962.

“Also, it would be exciting to have a snapshot of what it was like to live in Spry in 1912 along with the status of the school system and overall educational system in York Township and York County at that time.

“This is of special interest to me as my mother’s family lived in the house across the street from the property upon which Grammar School was built.

“Her home was the first grammar school beginning in 1875.”

The school stood on, yes, School Street in Spry.

To get at Mike’s query, a researcher could peer into the York County Heritage Trust Archives has thick files on Spry/Dallastown/York Township.

“The building was a four-room, two-story brick structure that housed three classes of pupils in grades one to eight. The School term had been lengthened to six months. The last year it was used for school purposes was 1962. The landmark was demolished on February 4, 1967. York Township Elementary, a more modern and larger facility, was built to accommodate the growth in the area.”

The new York Township school stands atop the hill in Spry, not far from its predecessor, long since replaced by Spry Otterbein United Methodist Church.

Members of the public could no doubt help Mike. Comment below or email him: grandiamike@aol.com.

– Mack’s is short for McDaniel’s, but in York County it means ice cream. 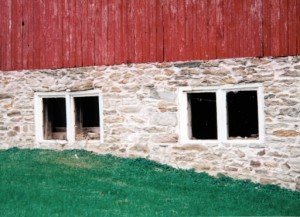 Marcia Feehan took this photo of a barn on a Spry farm, a reminder of the farms that surrounded the village 100 years ago.