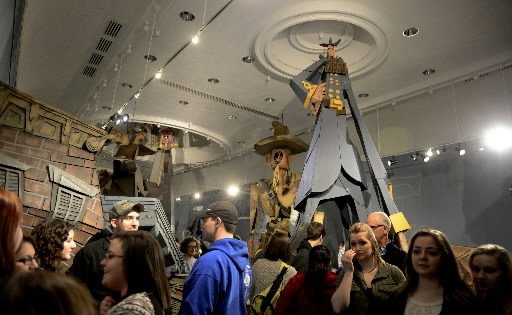 Confederate Gen. Jubal Early greets recent opening night attendees at an installation by Wayne White titled ‘FOE.’  The exhibit was part of what White described as a ‘three-ring circus’ that included the downtown installation, a lecture at sponsor York College of Pennsylvania and a retrospective exhibit on campus. ‘FOE’ will be open to the public through May 20. See additional photos at this YDR.com photo gallery. Also of interest: All Civil War posts from the start.

The best of many things in an intriguing exhibit at MarketView Arts is the theme itself.

The Civil War is artist Wayne White’s topic, a theme popular for discussion in York County in the past 25 years – and intensifying. The 125 years before that? Nowhere near the top of the list.

And the talented artist settled on York County’s long-healing war wound – the Confederate invasion of a borough surrendered by York’s fathers. Not only did those guys surrender, but they traveled 10 miles west to seek out Jubal Early’s rebels on June 27, 1863, to offer up the town.

Early’s men trooped in the next day, terrorized the town, extorted goods and money, looted what they could carry and, as part of all this, lobbed shells into a town, Wrightsville, full of women and children.

That Wayne White’s exhibit has generated excitement in York is an indication that Civil War discourse is healthy here as opposed to an unsound silence that lingered around here for six score years after the war. We explored and discussed the American Revolution, World War II and other big moments. The Civil War, well, that wasn’t our finest moment anyway.

In “FOE” exhibit notes, White does not get into all that. In fact, he writes in the booklet that he is not a political artist.

Why the Civil War as his topic?

He tells about the history of the place in his exhibits.

“I also saw the opportunity to use this as a metaphor for myself as a Southerner coming to York doing an exhibition about Southerners coming to York,” he commented in the booklet.

The installation, as the “FOE” is called, effectively captured the life of everyday Southern soldiers on Union soil, the artist’s intent. His cardboard characters sought to show their humanity and the humor of country boys enjoying relative abundance within York’s borders.

I suppose in every situation humor can be found. But one person’s fun can be another person’s misery. We must keep in mind that these same soldiers represented another country with its own constitution tramping on York County’s limestone soil.

Their thefts of livestock and preserved meats deprived women, children and the elderly of food when the breadwinner was away at war.

Confederates ruined fields ready for reaping. They rode off on horses needed for those harvests. They caused the free black population to flee, lest they be carried back into slavery.

Stripping it all away, these guys in gray were fighting for a government that sought to preserve chattel slavery.

Its creative characters are attracting people to understand, no doubt many for the first time, that the Civil War did reach York County soil. It’s causing people to talk about the war and the things that divided us then – and now.

Drawing on Wayne White’s themes, “FOE” instructs us about things that the North and South shared 150 years ago, our common humanity.

Whether intended or not, the size of  some of the cardboard figures does communicate a serious streak among the humor. That’s particularly true when you walk through the legs of towering Jubal Early in entering the exhibit.

That ceiling-high 3D figure gives you a glimpse, albeit a gnat’s eyelash in dimension, of the intimidation and pain inflicted on York’s population in those hot and stormy late-June days in 1863.

You also notice his oversized, outstretched hand, indicating: Give me. Give me.

In the end, that was the Confederate mantra, as more than 10,000 men raided York County, Pa., in those days before the Battle of Gettysburg. They not only purloined our stuff, but they stole our community pride in an otherwise respectable war record.

So, if the exhibit creates a sense of discovery in Civil War history and causes us to say “Give me. Give me more about the war, its underlying causes and its impact on York,” then “FOE” is indeed no foe of York.

How can I see the installation?

What will become of the installation?

FlipsidePa.com reports that Wayne White will likely save some pieces for an upcoming New York City show. “FOE” volunteer Rob Evans said he is hoping to store parts of the display. “Hopefully, we can find a way to re-assemble it some day … when York has its own (art) museum,” he told Flipside.

Mimi Pond, in York because her husband, Wayne White, worked on the installation, wrote an outside-in piece about York on Paris Review’s website.

Here’s just one excerpt: “All of York is crazy historic, dating back to 1740! Temporary capital of the Continental Congress! Articles of Confederation drafted and adopted here! Home of the Underground Railroad! WHAT? This is a mind-blower for a history-loving girl from Southern California, where they tear down anything older than 1967 and replace it with a building made out of Popsicle sticks and Elmer’s Glue.” You can read the whole Paris Review piece: A Week (or More) in Culture. 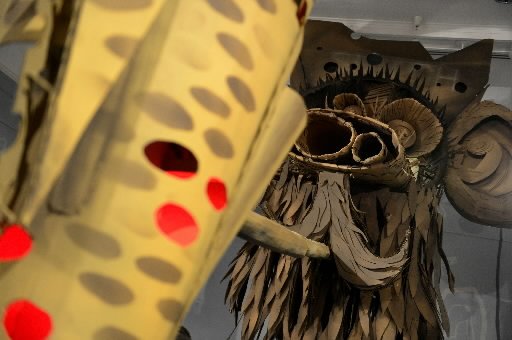 One of the installation’s Confederate figures, complete with a pipe.