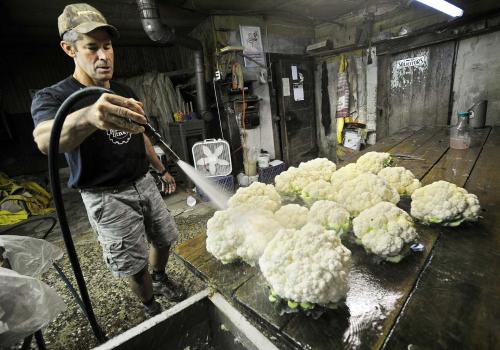 The Fitz family from York Township has not only operated their Eastern Market stand for the last day, a practice in market circles known as ‘standing’. The family is also getting out of the produce business, period. Their produce stand along Springwood Road will close, too. Here, ydr.com captured Joel Fitz washing down some heads of cauliflower. A ydr.com story on the family gives a brief history: ‘The business was started more than 100 years ago by Howard H. Fitz, the great-grandfather of Don Fitz and his siblings. Howard H. Fitz Jr. took over the farm from his father in the 1920s. Marlin Fitz, Howard’s son, started helping his father on the farm when he was 19. In 1978, Marlin sold the business to his sons, Robert and Joel.’ (See additional photo below.) Also of interest: Memories and musings of the old Eastern Market.

York County, at this moment, appears to rest uneasily in the projected eye of Sandy, the tropical storm/hurricane moving up the East Coast.

We might recall bad weather this time last year: Bad weather events from York County’s recent past and long ago and It’s becoming a habit. Remember last year’s late-October snow? and Before the 2011 late October storm came the 1972 snowfall. And before that? 1925.

Forum of the day, I: York countians aren’t messing around with preparations for Frankenstorm: https://bitly.com/shorten/. Are you ready?

Cannon shots: Remember about a week ago some northern York County residents reported rumbling, akin to an earthquake. Well, it turns out that the sound of big guns from Fort Indiantown Gap. This reminds you how the sound of cannons can carry. People in southeastern York County’s Delta, for example, reported hearing the fire of big guns at the Battle of Gettysburg.

Susquehannocks explained: A lecture on the Susquehannocks, York County’s predominant American Indian tribe in the 17th century, is set for Nov. 8 at Long Level.

Open house in Stewartstown: The Stewartstown Railroad plans an open house for Sunday, giving folks the opportunity to see its 19th-century train station. 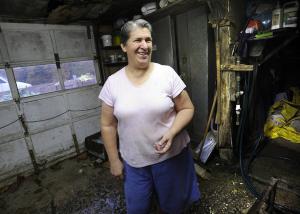 Longtime York County farmwoman Louise Veach grew up in her family business in York township. Forum of the day, II: Fitz Brothers are closing at the New Eastern Market, ending a tenure that started in 1955: Do you enjoy going to Eastern and other markets? Please comment below.