100 stories about Fissel finger in southern York County: Any one could be true 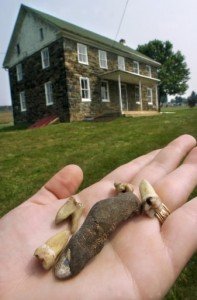 Theresa Krout with New Hope Fissel’s United Church of Christ holds a petrified, severed human finger and several teeth found during renovations in 2002 of an old stone home located on church grounds. Many items were unearthed during renovations of the Shrewsbury Township farmhouse: Egg cartons store old belt buckles and girdle clips, baby food jars hold nails, yogurt containers carry broken china and a coffee can has pottery pieces. ‘We kept looking for that pot of gold, but it never came,’ Krout says of the items found. Background posts: Two York County union churches vestiges of bygone era, Parade Music Prince Roland Seitz: From Shrewsbury to Friday Night Lights and The things you learn reading local history.
The discovery of the interesting photo of Fissel’s one-room school places a spotlight on that area surrounding Susquehannock High School.
Where did name Fissel’s, as nearby New Hope United Church of Christ is called, come from?
And what is the story of the severed pinkie finger founds during renovations to an 1823 house about six years ago?… .

Many 18-century York County churches or schools drew their names from the owner of land on which the buildings were erected.
Frederick Fissel was an early member of the church that borrowed his name, according to Charles H. Glatfelter’s “York County’s Lutherans.”
The church was of 16 Lutheran congregations pre-dating the American Revolution, according to Glatfelter. It was an early union church, which meant Lutheran and German Reformed (forerunner to United Church of Christ) congregations share buildings.
The congregation’s current building was dedicated 100 years ago this year.
But what of that finger?
Six years ago, the congregation was restoring an old stone house to help the homeless and victims of domestic abuse when they found a severed finger. At the time, some in the congregation worried that the story of the finger would overshadow the church’s ministry to the surrounding area.
But here’s the history lesson: Loss of fingers in farm machinery was common. As funeral director Jim Hartenstein said, someone probably wrapped his hand and went back to work. He had crops to tend to.
A story from the York Daily Record/Sunday News (7/5/08) tells about the find:

When members of New Hope Fissel’s United Church of Christ in Shrewsbury Township pulled away old walls, rotted floorboards and crumbling ceilings to renovate a 179-year-old house for needy families, they never suspected that on their mission of mercy, they’d unearth a mystery from the past.
Hidden behind four layers of wallpaper, thick coats of paint, horsehair plaster and wooden lath strips were, among other relics and curiosities, a gold wedding band, almost two dozen teeth and a pinkie finger – darkened with age, hard as stone and thought to be many years old.
Whose finger was it?
“We would love to know more,” said Theresa Krout, a church member. “But we just don’t know where to go.”
Church members worry that the Stone House will become known as the place the finger was found, said the Rev. Raymond Good, and not as the project to help the homeless and victims of domestic abuse in southern York County.
Good said when he learned of the discovery, he had visions of yellow police tape surrounding the house and a crime investigation.
When the finger was found in early December, church member Rick Krout took it to Jim Hartenstein, a funeral director in Shrewsbury and New Freedom.
“It looked to me as if it had been there a long, long time,” Hartenstein said. “It’s total conjecture how it got there, but it is a petrified finger.”
People often lost fingers in farm, factory or construction accidents, he said. It could have been lost during the building of the house in 1823. Back then, doctors weren’t able to reattach fingers, he said, so there would have been no purpose in retrieving it.
“Probably it was something that happened, they stopped, wrapped the finger with a bandage and continued on with their work,” Hartenstein said. “If there were crops to get into the ground, they couldn’t take the time to worry over that.”
But who could know for sure?
Dr. John Levisky, forensic anthropologist and a York College professor, said he frequently receives calls to look at material thought to be human remains. Bones are found occasionally in the renovation of homes as old as the Stone House, he said. “If we’re talking more than 50 years old, it’s more curiosity material.”
He added that with all plausible explanations for how the finger could have been lost, “It would be extremely difficult to prove that a crime was committed.”
By observing the finger under magnification, Levisky said, information such as approximate age and gender of the individual may be learned, as well as the age of the find.
Without a living relative, the individual could not be identified, and a DNA test would not be useful. The teeth would pro vide more information.
Age, gender and sometimes ethnicity may be determined, and it also would be possible to tell if the teeth belonged to the same person, or more than one, he said. Church members haven’t contacted a forensic anthropologist, and, believing the finger was lost by accident too long ago to investigate, they haven’t gone to the police.
And despite the evidence, some people are finding it hard to believe the finger isn’t fake.
“I still have that doubt,” said Gene Stum, a church member. “After all those years, why wouldn’t it have been decayed? . . . It would be embarrassing if it’s not.”
When their work began last October, the seven-member Stone House committee had been prepared to find some items that would provide clues into the lives of previous residents. The committee also had hoped to find something valuable in the house – a secret treasure, said church member Theresa Krout.
“We were starting to find these little things,” she said. “We would be in here literally sifting through the debris that dropped down through the walls.”
Into plastic containers went quills, writing lead, a pewter pencil sharpener and other circa-1800s school supplies.
Other discoveries included a Mellow Roll candy wrapper, hair clips, combs, buckles and buttons. They also found a fold-up fan, hat pins, tin spoons, knife handles and empty thread spools.
Old keys, nails, a thimble and a cork-topped glass vial filled with sewing needles. Trouser sewing patterns cut from an 1893 York newspaper.
And the wedding band and teeth – large, yellowed and showing signs of decay.
“We thought the teeth were fascinating,” said Rick Parrish, a church member. “But after finding the finger, they got put on a back burner.”
Rick Krout, whose great-grandfather, Emanuel “Pappy” Klinedinst, lived in the house as church sexton, made the find.
He was digging through the rubble from a demolished first-floor wall when he picked something up and called over to Parrish, “Hey, what’s this?”
Parrish held the object next to his pinkie and said it was a finger.
“I just remember that night,” Theresa Krout said. “It was like, ‘C’mon, guys. No, it’s not.'”
The committee told the 250-member church in its December newsletter for the Stone House project.
Jokes followed, along with the nagging questions. Was it a crime? Was it an accident?
How did it get in the wall?
“I imagine you could come up with 100 stories of how and why it got there,” Hartenstein said. “And any one of them could be true.”

For a possible reason why that finger was in the wall, check out: Part II: 100 stories about Fissel finger in southern York County: Any one could be true.