Fisherman about Codorus Creek in York: ‘Was pleasantly surprised by the variety of fish’ 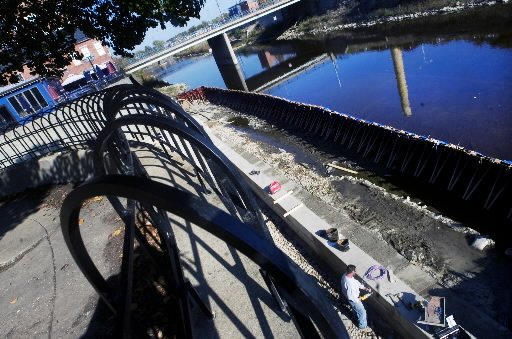 The Codorus Creek in York is gaining momentum as an asset to the city compared to the stressed, smelly reputation it gained 20 years ago and before. The focal point of the Codorus in and around the city is the Codorus Creek Boat Basin. Here, a worker adds to the facility about five years ago when more than $600,000 was invested in adding a stage and other improvements. Some enthusiastic creek supporters are attempting to upgrade the creek’s status by calling it the Codorus River. (See additional photo below.) Also of interest: What is the probability of another flood in York, Pa.? (Check out this photo of the Codorus when its quiet.)

Paflyfish.com carried a late-July post from a fisherman with the handle “Glenrockonthefly,” who enjoys working the waters of the Codorus Creek in and around York City.

His short account will be bait for city officials who are increasingly looking to Codorus Creek, or Codorus River as some call it, to be a larger part of York’s renaissance.

I’ll leave it just as he posted on this website for fishing enthusiasts:

“Fished the Codrus in the town of York this past tuesday. fished from 10:30 til 2:30pm, air temp in upper 80’s nice breeze, water temp cool and refreshing, most likely in 70’s but not sure, but not really warm like many creeks right now. Fished above and below the bridge on Grantly Street near York College.

“Was pleasantly surprised by the variety of fish: SMB, LMB, green sunfish, Rock Bass and 1 Crappie. All fish caught on hopper or olive WB and micro WB. Largest fish was 12 inch SMB, caught about 10 SMB, 5 LMB 3 rock bass and lost count of greens.

“All and all i was pleased with results, fished same place 1x last summer just landed rock and greens.

“Also plenty of carp easy to sight and can get very close if approach from downstream. Hooked one with 4# tippet on WB broke of almost as soon as hooked.

“Will try again soon at morning or eve.”

Others weighed in about Codorus fishing on this particular thread.

Then Glenrockonthefly came back on:

“The more I fish Codorus creek the mre i like it.” 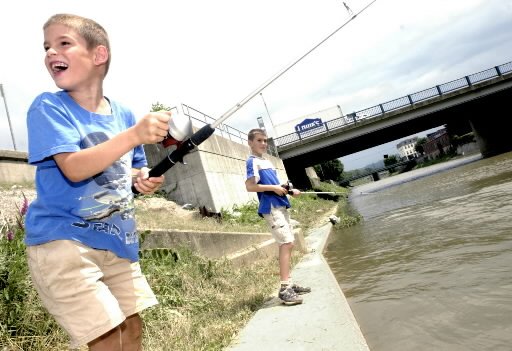 Fishing in the Codorus is not a new thing, as this 2004 photo indicates. They were enjoying the creek as part of a CodorusFest celebration.