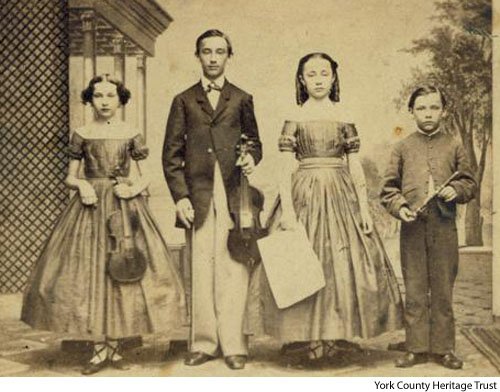 Anna, Fred, Louisa and Henry, all Bergers, were members of a widely known York County, Pa., family musical troupe in the 1800s. Also of interest: All York County Music and Musicians posts from the start.

June Lloyd’s Sunday column “The musical young Bergers” told the story of a then-prominent, but now-little-known musical group with roots in York County – the Bergers.
That 19th-century group later featured an pioneering woman saxophone player after the Civil War. And one of the Bergers played the coronet.
June wrote:

“Etta (Esther) Morgan, the first woman concert saxophonist, also came aboard. (The saxophone had been invented less than 30 years before, and a woman playing one well was quite a draw.) The troupe toured across America, even performing, by request, in Salt Lake City for Brigham Young. Etta Morgan wasn’t the only woman playing brass in their band. At an 1877 concert in Havana, Cuba, Anna Theresa Berger was reportedly showered with money thrown on stage in appreciation of her dazzling cornet solos.”

Actually, we’ll just include the whole column:
Each spring many of us trek to our local school auditorium to hear young relatives and friends show off their musical prowess. Some do quite well, but few will attain the success of a family of young musicians from York nearly a hundred years ago.
The Berger family moved to York County from Baltimore in 1855. Father Henry, mother Anna, and their four children under the age of 6 settled in Jefferson, where Henry carried on his trade of organ manufacturing. Two more children arrived before the family moved to York, a thriving town of 9,000, in 1859. They first lived and worked on the south side of West Market Street between Penn Street and the Codorus Creek. The Bergers soon relocated to South George Street, opposite their church, St. Mary’s, and built an organ factory behind their home.
Unfortunately, an overheated stove ignited the frame building. It burned to the ground in March 1861 and three finished church organs, patterns and tools were lost. The York Democratic Press reported that the building was insured for $500 and the contents for $600. That was not enough to re-establish the business, perhaps partly because of Civil War inflation.
In the meantime, the Berger children showed extraordinary musical talent. At the urging of friends who had heard them perform, the older four children, ages 6 to 11, gave their first public concert at Washington Hall on the southwest corner of George and King streets on April 15, 1862. Henry, Anna Theresa, Louisa and Fred Berger were joined onstage by Earnest Thiele, son of their music teacher. The York Gazette gave the young performers glowing reviews. A second concert was given a few days later, this time to benefit the Soldiers’ Ladies Aid Society. That organization provided assistance to the soldiers at the Civil War hospital on Penn Common, which was located almost in the Berger back yard.
At the end of that year, father Henry moved the family to Tiffin, Ohio, for a church organ job there. Show business, however, was still very much on the horizon. By July of 1863, the family signed on as the musical component of the MacFarland Dramatic Company, touring the Midwest and into Canada. Mr. Berger died at the end of the tour and Mrs. Berger took over as manager. In 1864, she signed a two-year contract for the children with the Carter Zouave Troupe, a juvenile vaudeville company. They sang, they danced, they played instruments, and they performed military drills in miniature versions of the distinctive Zouave military uniforms.
When that contract ran out in 1866, the Bergers joined the Peak Family in a very much in vogue Swiss Bell ringing company. The Bergers became so well known that they launched their own company in 1869. Fred, the eldest at age 20, became manager and the two youngest Bergers, Henrietta and Bernhart, who had been living with relatives in York, came into the family business. They were also joined by noted comedian Sol Smith Russell, who soon married 18-year-old Louise Berger.
Etta (Esther) Morgan, the first woman concert saxophonist, also came aboard. (The saxophone had been invented less than 30 years before, and a woman playing one well was quite a draw.) The troupe toured across America, even performing, by request, in Salt Lake City for Brigham Young. Etta Morgan wasn’t the only woman playing brass in their band. At an 1877 concert in Havana, Cuba, Anna Theresa Berger was reportedly showered with money thrown on stage in appreciation of her dazzling cornet solos.
After 17 years of criss- crossing the country to great acclaim, the Bergers gave their farewell concert in May 1880 at the Academy of Music in Troy, N.Y. Louisa and Bernhart had died, and the others were married or thinking about it. Fred married saxophonist Etta Morgan and also, as his manager, successfully launched brother-in-law Sol Smith Russell’s solo career. After Russell died in 1902, Fred managed theaters in Washington, D.C., including the Columbia and National, favorites of several presidents. He evidently kept up some of his York ties. At age 78, widower Fred Berger married native Yorker Katie Brant Thiele, widow of Earnest, the other young boy who performed at that very first concert in York 65 years before.
Fourteen-year-old Louise had wistfully reminisced about those days to her friend Delia in a letter written from another stop on the road: “I suppose that York is all the same, I sometimes sit down and think over the old times . . . remember when we had that picnic, we had such fun.” Even though they spent but a few years here, York seemed to stay in the hearts of these extraordinary children, perhaps because they spent much of their life in transit after they left.