Remember when Sears, Roebuck and Co. operated in the York County, Pa., Shopping Center? Now at the Galleria in the York area, Sears has discontinued its portrait center here and in its stores across the United States. Also of interest: From top dog and hot dogs to dogfight and dog days in York County, Pa.

First Sears ended its catalog business – the Sears and Roebuck catalog so popular in the days of outhouses – about 20 years ago.

Now it has shut down its portrait studios. 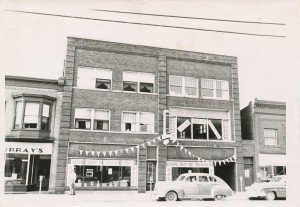 For the past 60 years, families have gathered to commemorate the passing years on film at Sears Portrait Studio.

But the tradition has come to an end.

With little warning, CPI Corp. closed more than 2,000 portrait studios in the U.S., including all York County locations.

The St. Louis-based CPI Corp., the operator for Wal-Mart and Sears portrait studios, abruptly shuttered its outlets on Thursday.

She’s bringing her celebrity to help in fundraising to acquire a property where Camp Security, a American Revolution POW camp operated from 1781 to 1783.

According to the ydr.com story, Author Rita Mae Brown to attend private reception for Camp Security exhibit, Brown grew up in the Hanover area,  a York County resident until age 10. “Rubyfruit Jungle” is her best-known book. “Outfoxed” has details of about York County and its people.

Celebrity visited here: Margaret Thatcher passed away this week, and of course, her travels brought her to York County years ago.

York County, after all, is the center of the universe.

Here is the lead of a 1997 story about Thatcher appearing as a Junior League lecturer:

Former British Prime Minister Margaret Thatcher walked out before a sold-out crowd at the Strand-Capitol Wednesday night, and in her famous acerbic style, talked about the challenges facing the 21st century.

She did so by linking the principles of America’s founding fathers to modern-day China, and in the process spared no condemnation of the evils of crime, communism, tyranny or the newly elected Labor Party. “America is the only country founded on the principles of liberty,” Thatcher said, adding that moral integrity was “not an objective, it was a way of life.”

Lashing out at critics who call for a “new social morality,” Thatcher said morality is an absolute. “These fundamentals will never change. They are there for all time. Circumstances change, but values are eternal. They bring order and peace to our life.”

Thatcher, 71, made a name for herself from 1979 to 1990 as Britain’s prime minister with an abrasive style and ruthless politics.

Today she is known as Lady Thatcher – she became a baroness after a Cabinet revolt ousted her as prime minister on Nov. 28, 1990. Thatcher is the only woman to ever serve as British prime minister, as well as the longest-serving prime minister of this century.

Check out other celebrities brought to York by the Junior League’s “In the Spotlight” series.