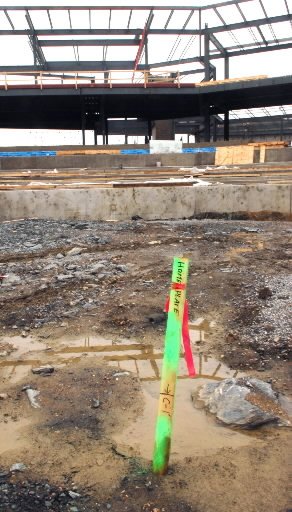 A marker designates home plate at York’s new baseball stadium. Will the first pitch drive a stake through the heart of a sad body of York history? Also of interest: Baseball is a game of myths so here’s a poke at a growing York baseball legend.

I hadn’t previously connected the demise of the minor league baseball York White Roses in 1969 with that summer of unrest that we know today as the race riots.
But there was the link, in a brief history of York baseball writer by York Daily Record/Sunday News writer Jim Seip this week.
The impact of that terrible summer of 1969 keeps emerging. Perhaps the first pitch at the first home game of the York Revolution this summer will bury that link to one of York’s moments solidly beneath the bedrock undergirding Sovereign Stadium’s home plate.
Here is that brief history:

As the York Revolution creep closer to their season-opening game, on May 4 in Bridgeport, Conn., here’s a quick look at a bit of York’s baseball and stadium history:
— Last pro baseball game involving a York team: On Sept.2, 1969, catcher Carlton Fisk homered and tripled to lead the Pittsfield (Mass.) Red Sox to a 7-4 victory against the York Pirates in the first game of a best-of-three Eastern League playoff series.
Fisk went 2-for-3 with three RBIs and three runs scored for the Red Sox.
The series was supposed to resume in York, but the series was postponed on back-to-back nights because of rain. Eastern League president Thomas Richardson then cancelled the remainder of the playoffs, wiping out the Elmira-Reading series as well. Richardson acknowledged that several players would not be available to play in the coming days because of military commitments.
The York Pirates folded at the end of the season. The team drew 52,934 fans in its last season, ranking fourth in the six-team Class AA Eastern League. The city suffered through race riots during the summer of 1969, and unrest and curfews affected attendance.
Last pro baseball game in York: On Aug. 27, 1969, the York Pirates wrapped up the city’s first minor-league pennant since 1925 by sweeping both games of a doubleheader against the Reading Phillies.
York defeated Reading, 6-4 and 3-1, before 4,296 fans.
In the last minor-league game played in York in the 20th century, Frank Brosseau threw a four-hitter in the nightcap. The win gave the Pirates their 11th straight victory – all coming at home.
The Pirates finished the regular season 89-50.
York’s last major stadium shift: In 1947, after shifting the site of its minor-league ballpark numerous times during the first half of the 20th century, York moved its minor-league team from West York’s Memorial Field to York’s Memorial Stadium.
The city’s team would continue to play at Memorial Stadium until the York Pirates folded at the conclusion of the 1969 season.