50 years ago in York, Pa.: AMF paved way for Harley-Davidson 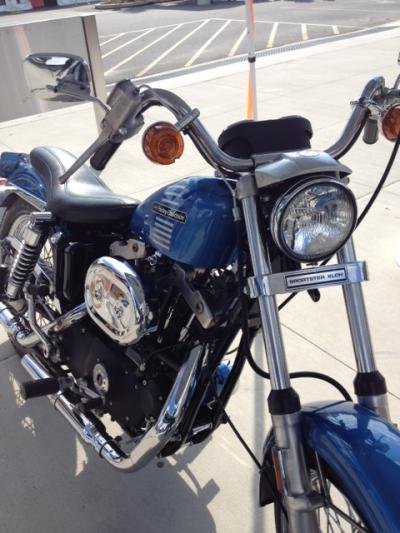 This Harley-Davidson motorcycle was assembled on Feb. 2, 1973, the first to roll off the line at the Harley plant in Springettsbury Township. This Sunburst Blue Sportster XLCH carries the serial number 4A60000H3. The company, then AMF, had just moved assembly of its bikes to York County. The bike, owned by  Mercer County’s Mark Duell, is seen here in 2013, but was back in York and on display at the Harley open house and associated Bike Night and White Rose Thunder activities this weekend (see another photo below and check out this 2014 photo gallery). Also of interest: AMF/Harley by the numbers.

A brochure from 1964 says 1,000 employees were transferred to York with arrival of AMF. They filled buildings previously occupied the Naval Ordnance Plant and before that, York Safe & Lock.

“Sixty-six working structures, encompassing a gross area of some 720,000 square feet of floor space are distributed over a 232 acre tract,” a story in “Greater York in Action” stated in 1968.

Less than a decade after arriving in York County, AMF moved assembly of its motorcycles to York County, and that Sunburst Blue Sportster XLCH, serial number 4A60000H3 rolled off the line on Feb. 2, 1973.

In two ways, AMF’s presence here was a homecoming to York County. In 1901, AMF – American Machinery and Foundry – opened its first plant in Hanover. And AMF operated in Glen Rock for decades. Interestingly, in a world of similar acronyms, Glen Rock was also home to the first AMP – Aircraft-Marine Products – plant in Pennsylvania in 1941.

Talk to former AMF employees who came here in 50 years ago, and you’ll receive a proud smile.

William J. Walters is perhaps the most prominent of these former AMFers. He also served on the Springettsbury Township Board of Supervisors and as York County’s Register of Wills/Clerk of Orphans Court from 1984 to 2000.

A former engineer, stopping by the York Daily Record’s booth at the York Fair, proudly summed up what AMF’s coming to York County 50 years ago has meant: No AMF, no Harley-Davidson.

Hog label tied to Harley for 80-something years.

Check out these photos and stories about Harley-Davidson in York, Pa.

Want to see the first motorcycle made at the Harley-Davidson plant in York in 1973? Here it is…the XLCH Sportster. pic.twitter.com/xFONSAgGrA