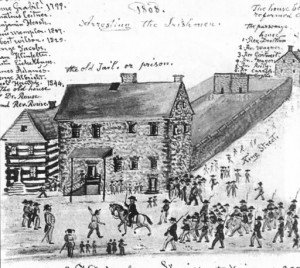 The first York County (Pa.) Jail, seen here in a Lewis Miller drawing, came under fire from a group of prisoners of war in May 1778. British prisoners in the American Revolution complained about conditions. The jail was located at South George and East King Streets. (Courtesy, York County Heritage Trust.)

The York community is pondering uses for the former York County prison on Chestnut Street now that it’s up for sale.
Makes one think. Where was York County’s first prison?
The answer is at the corner of South George and East King Street in York, just down the street from York County’s Centre Square Court House.
Many people are aware that British prisoners were detained at Camp Security, but this first county lockup housed its share, too.
In fact, allegedly poor conditions there attracted the attention of Continental Congress, then meeting in York. “Nine Months in York Town” describes the Brits’ complaints this way:

Prisoners of war in York County’s two-story jail at South George and East King streets, new in town after their transfer from a less-secure facility in Carlisle, were not happy with their living conditions.
They scratched out a letter to Congress in May claiming their “miseries had been aggravated by a most criminal imprisonment in a loathsome Jail, infected with a contagious fever, and polluted with noisome smells thro’ every part.”
The letter found its way across the street to James Smith’s law office, where the Board of War met. The officials investigated the complaint and came back with a report to Congress within five days.
The seven prisoners had the run of the jail, two airy rooms and the 180-by-154-foot exercise yard running along East King Street. Prison officials regularly swept the yard to keep it as clean as possible. Inspectors found no filth, thanks to a privy at the yard’s far end.
“These Gentlemen, too, have three servants to attend them,” the board reported.
Dr. John Connolly, one of the prisoners, was known for his repeated complaints. On one occasion, Connolly claimed he was near death from confinement. A physician found only a mild illness of a “Hippochandriac Nature.”
If anything, the board reported, the prisoners should be more closely confined. They had so much freedom that they were escape risks.