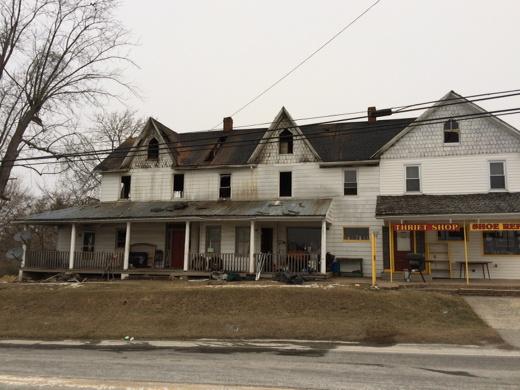 When you see an old building this large in a rural area, you know it has an interesting past. A fire elevated this Lower Chanceford building into the news over the weekend. Thirteen people were displaced. The building, a former car dealership, is a landmark in those parts. June Grove’s and Richard Konkel’s ‘A History of Chanceford Township, York County, Pa.’ places this building in the hamlet of Sunnyburn. The book also notes: Wiley Gemmill was operating a general store in the building in 1907, and he sold buggies and later Willys Overland and Willys Knight automobiles as well as International Harvester Farm machinery. Gemmill sold his store to Clyde Zimmerman, who operated it from 1938 to 1978, and it has had other owners since. As for more about Sunnyburn, Grove and Konkel quote George Prowell, who described it ‘as a prosperous village one mile below Centreville on the York and Peach Bottom Road.’ Put in contemporary terms, it’s three miles south of Airville on Route 74. Also of interest: The Brogue, York County, Pa.: ‘No one knows where it begins or ends’

This prompted a nice note from a member of this longtime York County family.

“You were able to dig up quite a bit of information that is long-lost to us Helbs of today. My father is the only surviving Helb in his later years (65), with me and four other cousins (and now baby Owen Helb to carry on the legacy!) as the last descendants grappling for info on our family’s heritage.

“Little is known to us of our family so your research and reporting was able to bring a lot to life.”

A little bit of Hanover will be included in this year’s Grammy gift bags. http://t.co/YqbpWgNFxt @flipsidepa pic.twitter.com/aJH6l5HdI3