Fill ‘er up at Naugle’s in Springetts and receive a free plane ride: Linked in with neat York County history stuff, June 17, 2012 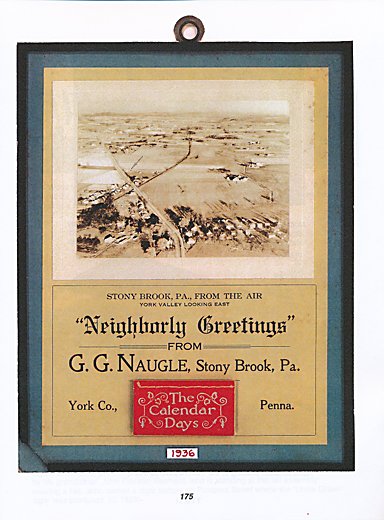 The Stony Brook area of Springettsbury Township was home to one of the earliest airstrips in York County, according to John F.M. Wolfe in his ‘Profile of Aviation.’ It was built circa 1925 in the neighborhood of land that Campbell Chain and Motter’s Printing Press companies later occupied and was used by barnstormers. The arrow on this aerial photograph shows Pop Naugle’s Stony Brook gas station. Naugle operated an airstrip in that vicinity starting in 1937. Mom’s Diner also marked the spot. Naugle was quite a promoter. When customers requested a fill-up at his gas station, he punched their card. When the card was filled, they received a free plane ride. Wolfe’s spiral bound book is filled with such stories about York County airports and pilots. It’s available at the York County Heritage Trust bookshop. Also of interest: What about the original York Airport that operated along Haines Road in the 30s?

The Red Zone: Time’s Joe Klein visited the heart of the Red Zone, our own Red Lion.

It’s remarkable how often national political pundits visit York County. Perhaps it’s our proximity to everything else. Or perhaps our brand of moderate to right Republicans attract journos because it reflect much of Middle America.

Here’s his road trip report: Courage in the Red Zone.

New and improved: The YDR  has introduced its Data Center, home of all kinds of information, from tax information to test scores. Check out: YDR data center.

Stewartstown station: The Stewartstown Railroad station, the landmark which preservationists are hoping to keep in public hands, will be open for all to see on June 23.

Knowing the flag: We  celebrated Flag Day last week, but we must remember what the flag means. Here’s a test of our flag knowledge.

Forum of the day: I: A North George Street bridge between Emigsville and Manchester will be replaced starting Friday: http://bitly.com/LM7fq7. Detours are set for the project, which will take 90 days. Will that change the way you travel? Any shortcuts in mind that you would share? That old bridge, btw, has a key feature that the new one probably won’t sport: a keystone monument.

Forum of the day, II: So a Wallenda walks on a tightrope across Niagara Falls, and an Adams County aviation company gives him an assist: http://bitly.com/MVhqVe. Are you fascinated by his daredevil? Ever been to Niagara Falls? And York County’s own Susquehanna Trail connected Niagara Falls and D.C.