Felton landmark: ‘The mill at one time was gossip central’ 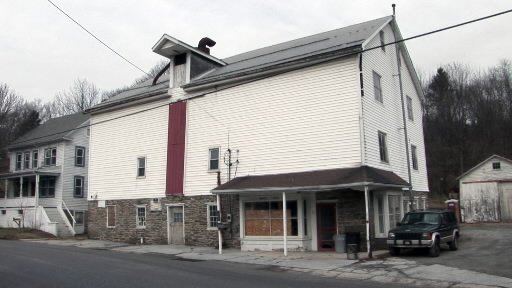 It’s not obvious from the outside but this longtime southeastern York County, Pa., landmark, the Felton Mill, is coming down. York Daily Record/Sunday News photographer Paul Kuehnel tell the story via video. Background posts: Old Shrewsbury house disappearing hand-hewn log, square nail at a time and ‘It’s so sad to see such a great piece of architecture fall down’ and Old Ma & Pa Railroad trestle may again carry passengers – on bicycles – some day

Even the man who operated the old mill in Felton isn’t grieving the fact it’s coming down.
It’s a fire hazard, Donald Grove said of the old landmark of Civil War-era vintage.
Still, it’s sad to see York County’s old buildings coming down one by one. Or in the case of the Felton Mill, piece by piece.
A York Daily Record/Sunday News story (1/14/09) tells of its pending demise:

Felton borough is losing an important part of its history, nail by nail and board by board.
Nolt’s Excavating of Lancaster County on Tuesday began dismantling the 146-year-old Felton Mill on Main Street.
“It’s a big loss to local history. I was hoping there was some way to save it, but that wasn’t possible,” former borough councilman Gary McBrien said.
The borough, which has owned the building since 2001, was forced to vacate the former grist mill three years ago when officials learned the historic landmark was structurally unsound. A sewer line had frozen and, while the plumber was repairing it, he discovered a crack on the main floor. Engineers then investigated and found cracked beams in the ceiling. They ordered the borough to move its offices from the lower level and close the building to the public.
Since then, the council has held its public meetings in the Union Volunteer Fire Company on Main Street and opened a borough office at 49 High St. The borough obtained a $40,000 community development block grant to pay for the demolition of the mill.
“I think people are a little sad. The mill at one time was gossip central for many of the men in the borough. It’s where you stopped to get the news,” borough secretary Joy Flinchbaugh said.
One resident whose personal history is tied to the mill is Donald Grove. His family operated the feed mill for 46 years, and he and his wife, Nancy, still live next door to it.
“I know it’s a landmark, but I’m glad (about the demolition) because I live so close and I’m worried about fire. It’s really become a safety issue,” Donald Grove said.
Constructed in 1863 by the Tobias Crumbling Company of Lancaster County, the four-story stone and wood structure almost didn’t get built. As Grove tells it, the day laborers Tobias hired to build the mill had to walk from Columbia to Felton.
With the Civil War raging and Confederate soldiers under orders to take Harrisburg, Union soldiers were forced to set fire to the Columbia-Wrightsville Bridge to prevent the rebels from invading the state capital.
“They (Tobias’ construction workers) crossed the bridge the day before it was burned,” Grove said.
After its completion, the grist mill used water from Pine Run and Mill Creek to process flour until the 1940s, Grove said.
His father, Charles E. Grove, began working at the mill in 1922 and bought it in 1948. Donald and his brother, Charles, joined their father in the business a decade later.
“We had a growing business until times changed,” Donald Grove said. He retired in 1994.
Grove said he does not feel nostalgic about the building, although he and his family toured it one final time last weekend. He also has kept a few trinkets as mementos, and his wife hopes to have someone use one of the mill’s old beams to make keepsake wooden bowls for their children, he said.
“The building’s been leaning for as long as I can remember, but the fire hazard, that’s what I’m worried about. It’s time (to take it down),” Grove said.