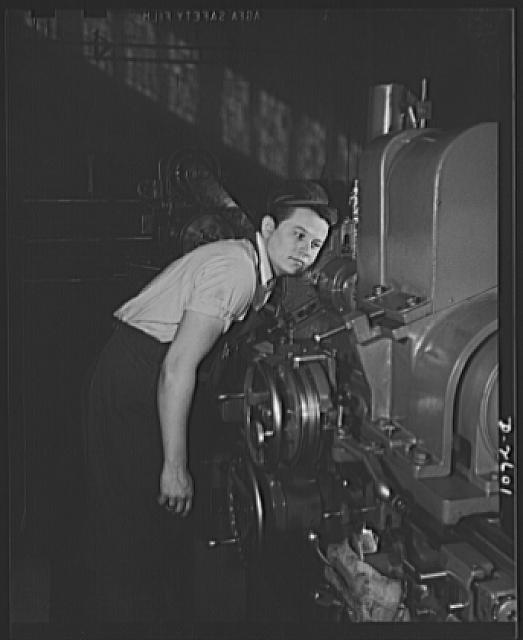 This Farm Security Administration photograph from 1942 shows a York Safe & Lock worker listening for defects during the grinding of a powder chamber for a thirty-seven-millimeter gun. “Site of this production is a former lock and safe company now converted to manufacture of weapons for victory,” the photo’s caption states.

The recent Floorola and past York Safe & Lock posts have drawn on a wonderful repository of Depression- and World War II-era photographs from the Farm Security Administration-Office of War Information archives.
These are among the most famous documentary photographs produced. And FSA photogs covered York County and elsewhere in Central Pennsylvania and Northern Maryland … . 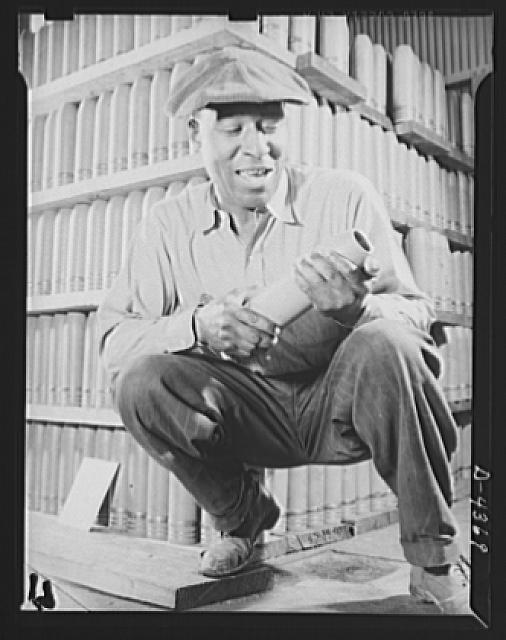 Robert Scott is fondling a little “bundle for Berlin,” the FSA caption states. These 75 mm shells are being turned out on a mass production basis at Edgewood Arsenal, which works around the clock. The northern Maryland site, only about 20 miles from the Mason-Dixon Line, attracted many workers from York County.

The FSA site states:
Created by a group of U.S. government photographers, the images show Americans in every part of the nation. In the early years, the project emphasized rural life and the negative impact of the Great Depression, farm mechanization, and the Dust Bowl. In later years, the photographers turned their attention to the mobilization effort for World War II. The core of the collection consists of about 164,000 black-and-white photographs. This release provides access to over 160,000 of these images; future additions will expand the black-and-white offering. The FSA-OWI photographers also produced about 1,600 color photographs during the latter days of the project.
After assessing the archives, just search on, say, “York County Pennsylvania.”