Family member would like Boring Furniture Co. of North York, Pa., to be remembered 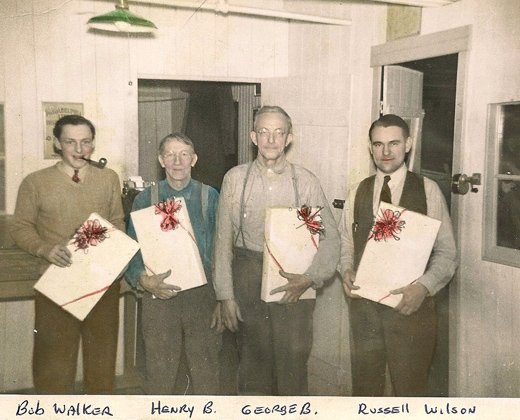 Employees and owners of the Boring Furniture Co., Laurel and Court streets, North York, pose for he photographer. The table-maker has long been out of business but a family member is hoping that its work is long remembered. Also of interest: These antiques bear the York, Pa.-made Pennsylvania Furniture Co. label and Red Lion’s Ebert Furniture: From bedroom suites to gunstocks.

“Little did Henry E. Boring think while fashioning a table in is mother’s kitchen more than 50 years ago that he and his brother would some day have their own furniture plant.”

That is how a newspaper article in 1949 (see below) described the origin of the Boring Furniture Co., one of many York County furniture makers that started operating in and around the turn of the 20th century.

At the time the article appeared, the company appeared to specialize in parlor tables.

Let’s just say that Boring Furniture Co. and furniture-makers around York County were not involved in a boring industry.

Judging by the large number of furniture-makers, that widespread craft was a tribute to those who worked with their hands and the transportation system that brought their work to ready markets. And judging by the interest stories on these woodworkers receive on this blog, people are still benefiting from their handiwork.

“I am attaching an article I found at the Historical Society (York County Heritage Trust) years ago, a photo of one of my favorite Uncle’s Clair E. Boring, home on leave, standing on the steps of the factory. The Boring Furniture Co. sign you can see is over the top of the door, a photo of my Grandfather George W. Boring, his brother Henry Boring and two office workers, Bob Walker & Russell Wilson. I am also sending a photo of a couple of tables they made although they made many different types. I understand they were some of the best made around this area.

“The building is still standing & looks as bad as it did in my childhood, I am 72 yrs. old. I have no idea who owns the building now, my father sold the business a couple of years after his last brother died in the 70’s as he was not well himself. He died on June 10, 1975 at age 60. The person that bought it I heard sold it to someone else, then they went out of business so Boring Furniture Co. is no more. I often wished my three brothers would have taken an interest in the business but didn’t.

“I had been trying to donate a few Boring tables & photos to the Heritage Trust that I have here at home but due to a serious illiness I had most of last year did not get around to calling them again. I would like the Boring Furniture Co. to be remembered. I hope you find this interesting and thank you for putting them in your article. This brought back a lot of good memories about the times I went along to the factory on a Saturday with my father.”

A sampling of other furniture-makers mentioned in Gordon Freireich’s column:

Also
If anyone has Boring Furniture in their home or would like to correspond with Sarann, comment below or email me,jem@ydr.com. 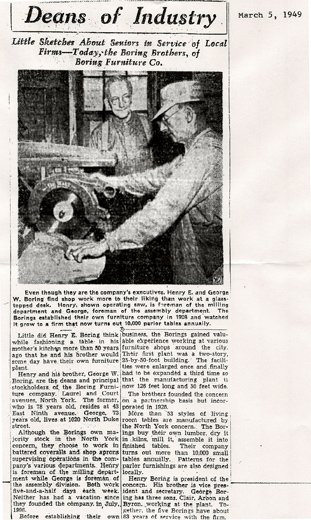