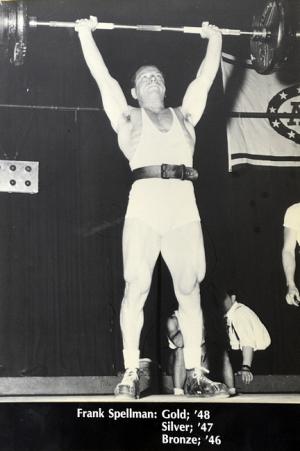 Bob Hoffman’s Olympic weightlifters who put York Barbell and York County on the body building map? Many have died, so who is the oldest living living Olympic gold medalist in weightlifting? A ydr.com story,  For 1948 Olympian, gold medal dream started in York, tells about Frank Spellman, who also is America’s oldest living gold medalist. Spellman lived in York from 1945 to 1952 and became part of the famed York Barbell Club. Spellman’s story also provides context about York as a weightlifting capital:  ‘York? That was a magical name to weightlifters around the world,’  said three-time Olympic medalist Pete George during a 2004 interview. ‘Being on the team was like playing baseball for the New York Yankees. Once you were on that team, you became a superstar.’ Also of interest: All York Barbell posts from the start and Olympian/lawyer Whitney Metzler comes home to York County and York native and Special Olympian Loretta Claiborne: ‘Role model for others with disabilities’.

Urban markets are growing in the U.S. as city dwellers are seeking fresh, locally grown food. Well, York County has had such farm-to-customer markets for 250 years.

So that leads to the question: Which is your favorite such market: Central, Farmers, Eastern, Morningstar or one of many growing roadside stands? Please comment below.

Behind the dams: The Baltimore Sun recently put forth a major report about the sediment buildup behind the Conowingo Dam on the Susquehanna River in Maryland. That’s a major hidden issue, with no easy solutions, as ydr.com also reported several months ago in River of Mud.

From the archives: York Galleria’s food court is in the news because of a cockroach issue, and this makes me think about our suburban shopping centers, particularly this point: Downtown retailers were moving branches to suburbs in 1960s-1970s. So they were contributing to the downtown’s retail decline. But what else were they to do? Background:  From top dog and hot dogs to dogfight and dog days in York County, Pa.