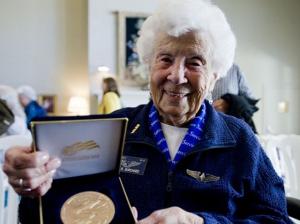 Ninety-five-year-old Mary Reineberg Burchard died recently. She was a daughter of York County and a Congressional Gold Medal winner for her pioneering work as pilot for the Women Airforce Service Pilots (WASP) in World War II. The York Daily Record/Sunday News’ Mike Argento wrote this (2/10/12) about the podiatrist-turned-aviator: “The short biography of Burchard would describe the daughter of a well-known York businessman, a woman who went on to serve as a pilot during World War II and earn, decades later, a congressional honor. A woman who became a doctor when women doctors were rare.” Mary came from a successful family which also produced an actress-turned-nun sister, Mildred. Also of interest: World War II pilot from York County, Pa.: ‘Female pioneers … inspire generations of young women to achieve the impossible’ and Pioneering aviator Aline Rhonie another York native who made U.S. headlines.

A layout in the Weekly Record profiles vintage Valentines, a favorite of local collectors.

Here’s a brief history of Valentine cards, courtesy of the Weekly Record and about.com:

“Many of the earliest Valentines  were simply notes and letters handwritten on ordinary paper.

“Long before email, Twitter, store-bought and electronic cards, romantics used paper valentines to declare their love for that special person.

“By the 1700s, writing special notes and letters for Valentine’s Day had gained in popularity. A little more than 100 years later, companies began making special paper that was used to create valentines.

“These handmade declarations of love were often adorned with sketches and watercolors, pinpricks and cutouts, feathers and dried flowers, scraps of cloth, yarn, ribbon or even locks of hair.

“Valentines were popular in Britain, Germany, France and other parts of Europe, and by the late 1830s, mass-produced cards were available.

“The craze had already spread to the United States, so cards printed in Europe began showing up here as well, and within a few years American-made cards were available, too.

“Those early cards were flat-paper sheets printed with colored illustrations and embossed borders. It was not long before manufacturers began adding hearts and roses, Cupid with his bow and arrow, angels, paper lace and beads to make the cards even more distinctive.

“By the late 1800s, stand-up cards with a base and several three-dimensional fold-out layers, and cards with honeycomb paper puffs that opened to form a variety of shapes including bells, fans, balls and hearts were popular.

“There were mechanical valentines that often featured cars, ships and trains with moving parts operated by a paper lever, and some valentines were made to conceal hidden treasures such as jewelry.”

New court in town: The gavel has opened a new York County court, a veterans court, to address the many returning veterans from wars in the Middle East. Check out: Veteran-friendly court opens for business.

Check this out: Organists to play the wonderful pipe organs in York’s historic churches are in short supply. Visit: Wanted: organist to play church hymns .

Forum of the day: Joan Concilio over at Only in York County asks, and gains answers to some questions including: Where’s Gino’s in Towson?