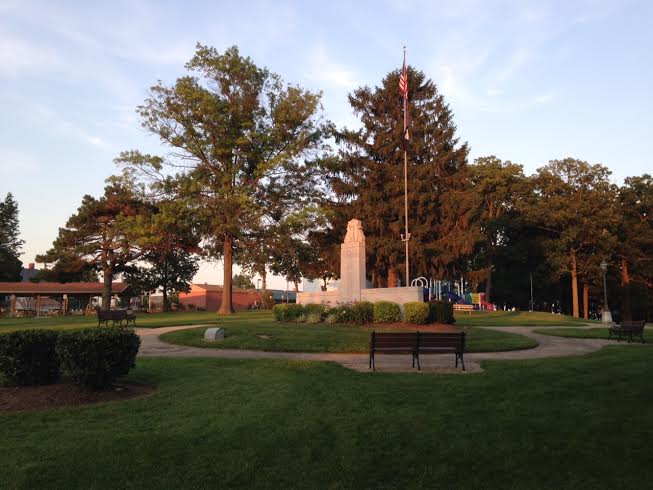 This is the view across Red Lion’s Fairmount Park. That’s the community war memorial (see below) seen prominently in the photo. And there’s a playground in the background, right. A water park can be seen in background, left. The popular water park attracts scores of visitors to the park. The nearby, popular Kaltreider-Benfer Library stands near the park. Also of interest: Red Lion’s towering Fairmount Park off the beaten track.

It’s been 35 years since the publication of the anniversary book ‘Red Lion: The First Hundred Years.’

But it’s still an interesting look at a then-changing community that has continued to evolve.

Fairmount Park has enjoyed some of that change with a water park going in a couple of years ago and an attractive playground for kids. (Red Lion’s downtown undergoing a rebirth, as well.)

So through we’ll look at Red Lion through the prism of Fairmount Park.

Here goes, courtesy of the 1980 century anniversary book: Did you know these 5 things about Fairmount?

1. Fairmount is the highest point in Red Lion and the second highest in York County. (That probably means the second-highest inhabited point in York County, after Roundtop Mountain.) At any rate, the view from Fairmount, through the trees, is a sight to see.

2. Businesswoman Catharine Meyer, the ‘Mother of Red Lion’ owned the park land as well as other valuable real estate around the borough.

3. Fairmount became a park when Catharine Meyer’s son-in-law J.A. Miller, seized an opportunity. When ministers and churches fought trolley excursions on Sunday to Highland Park in West Manchester Township, Miller cleared part of the land so Red Lion area residents could have their Sunday picnics at home. Highland and other electric parks were constructed to pump ridership in off-peak periods, such as Sundays. So in this sense, Fairmount could be viewed as an electric park, unplugged.

4. Works Progress Administration labor in the Great Depression landscaped the park into a terraced lawn facing Boundary Avenue, with trees forming the backdrop. 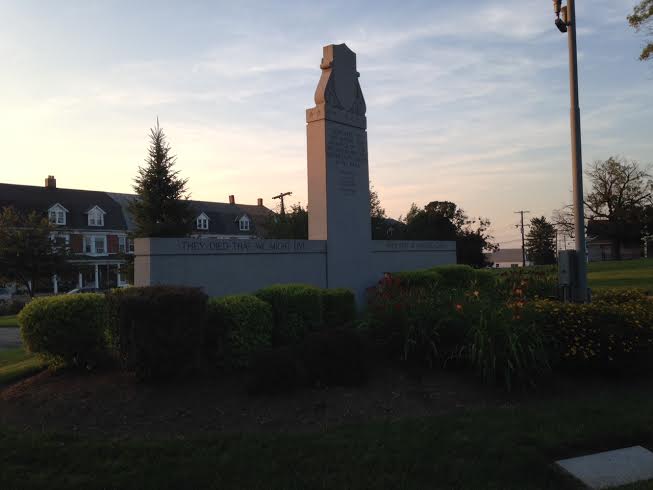 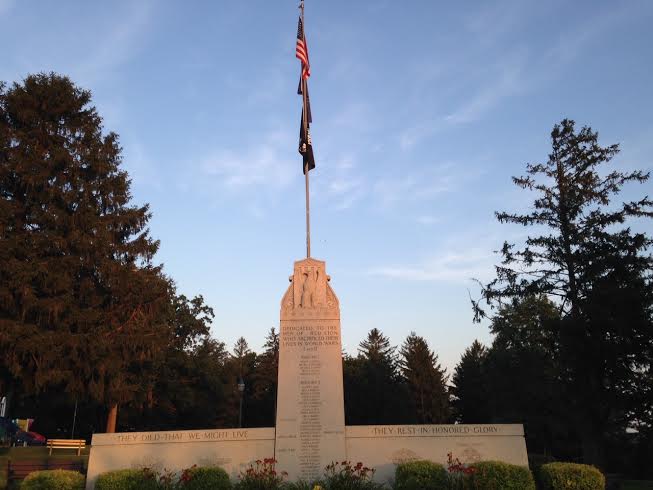 The book continues: ‘There, on a 12-foot granite shaft, our town inscribed the names of the 27 World War II dead and the five Red Lion men who gave their lives in World War I.’ Since then, the names of those who made the supreme sacrifice in other wars are inscribed on this stately monument, one of York County’s most impressive.

+++
Also:
To see headlines of past York Town Square posts with short descriptions, visit these archives.