Everywhere you look in York County, Pa., you see a one-room school 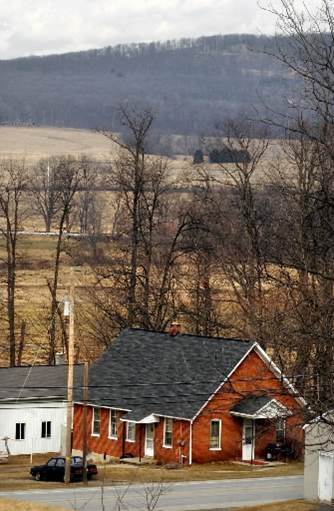 This is a familiar former one-room school, sitting for decades along the York Road in Heidelberg Township. This has the look of a former one-room school, well-built, usually brick or stone, strangely appealing. Schools in this area – the heavily German area of southwestern York County, were the last to become public. ‘Through the influence of Thaddeus Stevens and others, the Legislature passes an act to establish a system of public schools in Pennsylvania,’ a short history of one-room buildings in the York, Pa., Daily Record states in its 1834 entry. ‘A storm of opposition follows and the act is nearly repealed a year later. Districts are given the choice whether or not to accept and establish public schools. The law triggers the building of one-room schools in rural areas around the state during the next 50 years.’ After World War II, the 300 one-room buildings were consolidated into 50 new schools with multiple grades and classrooms. The number of school districts also came down – from 32 to 15. But the one-roomers are standing around York County today, used in a variety of way. Also of interest: Check out these photos and stories about one-room school in York County.

VFW at 100: Here’s a thoughtful York Daily Record piece on the century-old Veterans of Foreign Wars, and that venerable group’s struggled to attract vets from other wars.

And here’s just one example of a local VFW post and how it received its name.
+++
Back to school:

Turkey Day quiz: Test your knowledge of Thanksgiving Day with this quiz.
+++
Deltiologists by the scores: Check out this MediaCenter photo gallery about the weekend postcard show at York Expo Center.

+++
Putting it on a timeline: This timeline shows Tom Wolf’s progression from his York County birth to his election as Pennsylvania’s governor.

+++
History Mystery: Sometimes you drive by a building and you don’t give it another thought. Here’s your chance to show off your knowledge of this big building: