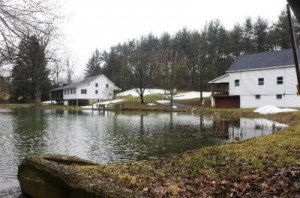 Did you know that a Girl Scout Camp operated for years near Codorus State Park? Cost-cutting caused Camp Gi-Sco-Ha to shut down in 2010, and the state has purchased the facility long operated by Girl Scouts In The Heart of Pennsylvania in Harrisburg. It will be maintained as open space. ‘It’s great that we could reach an agreement with the Girl Scouts that will keep this area as open space and still accessible for those who have fond childhood memories of camp days, and those who will make memories in future visits,’ a state spokesman said. The presence of the camp is indicative of all the interesting sites tucked into the three corners of York County. The Hanover Evening Sun covered the story. Also of interest: Glen Rock reportedly leader of the Girl Scout pack and Remember Boy Scout Camp Ganoga?

The boobleheads showing John Wilkes Booth with a derringer are still in the news.

First, we have Lincoln’s presidential library in Illinois pulling the figurine. (What was it doing there, of all places?)

Now the sculptor of the bobbleheads says that business is booming.

York Daily Record/Sunday News columnist Mike Argento parodies the unfortunate enthusiasm some have for the toys: Busting on the Booth bobbleheads.

I think any indecision on whether such sales are appropriate can be decided by the analogy offered by historian Harold Holzer: “It’s like selling Lee Harvey Oswald stuffed dolls at the Kennedy Center.”

York not in the news: Harrisburg has been rated the 20th most dangerous city in the U.S. York, fortunately, did not make the list.

Newseum in the news: The Newseum in D.C. is offering an interactive feature showing front pages from all over the world.

Just put you mouse on a city and up pop newspaper headlines.
“You can spend forever here, York Daily Record/Sunday News Managing Editor Randy Parker wrote, in pointing out the feature.

More Pinterest: Buffy Andrews, of Buffy’s World, is also a Pinterest enthusiast, operating more than 60 board. She just pinned something on S & H Green Stamps. Remember them?

Blog post of the day: Buffy’s World has put up the best of Yorkblog for the week: Live’s new lead singer to March Madness to pothead Bob to American Pickers.

Forum of the day: A straw poll on ydr.com asks: Do you think stores should be allowed to sell bobbleheads of John Wilkes Booth?