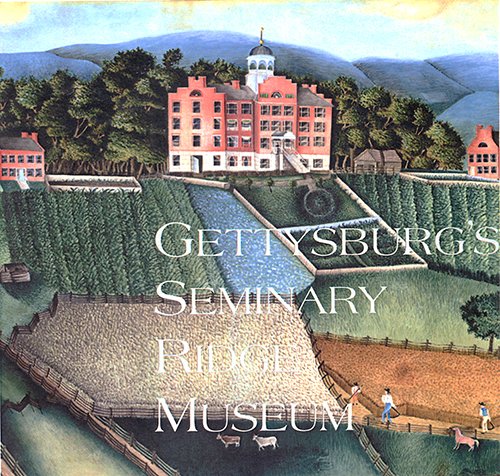 The Seminary Ridge Museum will open on July 1, as part of observances of the 150th anniversary of the Battle of Gettysburg. This image comes from the a brochure telling about the museum in the building that loaned its name to Seminary Ridge. The ridge was the scene of heavy fighting during the battle. Union Gen. John Buford used the cupola atop Schmucker Hall, the museum’s site, to observe Confederate troop movements. Actor Sam Elliott made the general – and the cupola – famous in modern minds in the film ‘Gettysburg.’ Also of interest: Sermon in 1846 from son of York County – Samuel Schmucker – resonates today.

“Schmucker Hall,” a brochure outlining Gettysburg Seminary Ridge Museum, “the historic Seminary building is being renovated as a state-of-the-art museum where the Voices of Duty and Devotion come to life in 20,000 square feet of interactive exhibit galleries to educate generations and to stimulate awareness of human character, causes and consequences of war and the enduring American spirit.”

Those are the big goals of a museum opening in Gettysburg Lutheran Seminary’s landmark building.

The seminary, the Adams County Historical Society and the Seminary Ridge Historic Preservation Foundation have joined to turn the old building into a new museum.

Even work to convert the old seminary building into a museum produced interesting moments.

Crews broke through the attic and uncovered a wardrobe, nearly a century old and signed by decades of seminary students.

Letters to Civil War soldiers fell when the ceilings were pulled down. Bottles of sarsaparilla were found stashed between wall joists.

Workers discovered a plaster relief of Martin Luther and a wooden mallet, both from the 1800s.

Most surprising, though, were the shoes.

Four men’s shoes were found, leather and dirty, the oldest dating to 1830. They had been cut, as if during a ceremony, then boarded within the walls of a historic dormitory at the Lutheran Theological Seminary in Gettysburg.

Crews made the discoveries while working to convert the 180-year-old building into an interpretive museum.

“This is actually very significant because this type of shoe concealment is not well documented,” said Karin Bohleke, director of the Fashion Archives and Museum at Shippensburg University.

Though much of the superstition remains a mystery, scholars believe shoes were deliberately damaged then walled within buildings to bring good luck.

Sometimes, the shoes were concealed beneath chimneys to block evil from entering, Bohleke says.

Throughout Europe there have been discoveries of shoes, horse skulls, and even 400-year-old women’s corsets walled within historic buildings.

“There’s a lot of speculation because we have so little information about this,” she said. “It’s particularly interesting that the (seminary) – or its builders – embraced ritual folk magic in this way.”

The four shoes were discovered during the renovation of the seminary’s Schmucker Hall and they were found behind the wall in separate locations. There are plans to display the findings as part of the interpretive museum at the facility.

Discovered early this year, the shoes are just part of a trove of relics unearthed during the construction.

Adams County Historical Society archivist Ben Neely says these discoveries are among the most significant to occur in Gettysburg in recent years.

Several letters had fallen between the floorboards and were lost, concealed in the basement ceiling, for decades. Among them was one letter dated July 3, 1863, the day of Pickett’s Charge. It was sent to a soldier named George Dull of the 142nd Pennsylvania

During the fighting, the “Old Dorm,” as it was known, was converted to a hospital and Dull was believed to have been one of the soldiers treated there.

Dull’s father wrote to encourage him to try and kill “old Jeff,” referring to Jefferson Davis, president of the Confederacy. And Dull’s mother wrote to say men had been jailed in Somerset County, for avoiding conscription. But nine made a hole in the jailhouse and escaped.

Also among the artifacts is an advertisement for Shriner’s Balsamic Cough Syrup, believed to be from the 1850s when three bottles of syrup could be bought for $1.

Two glass sarsaparilla bottles were found, unbroken, and were dated to the 1870s or 1880s. And a bottle of “genuine German bitters” believed to be from the 1880s was found.

Demolition crews working on the site received specialized training to spot and protect historic items. Workers also signed a document stating they promised to turn all artifacts over to seminary officials.

The project superintendent called it the job of a lifetime.

“I never imagined how exciting it would be,” said Dwight Pryor of Morgan-Keller Construction, based in Frederick, Md. “Every day you go to a job like this, you don’t know what you’re going to find.”

Seminary officials estimate that only 25 percent of the original walls have been opened during construction. More relics might be hidden, but officials are working to keep as many of the walls untouched as possible.

Many of those walls have withstood bullets and cannon balls. The building itself was engulfed in some of the heaviest fighting during the Battle of Gettysburg.

Neely takes an amount of pride in the fact that it remains standing solid.

Maybe, he says, there’s something to the magic of those shoes. 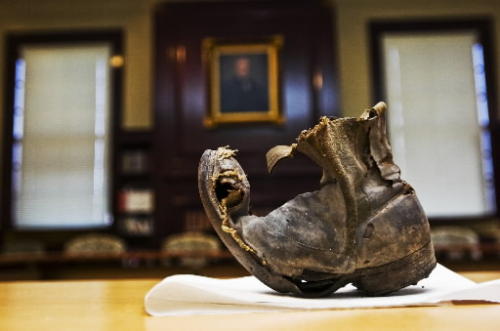