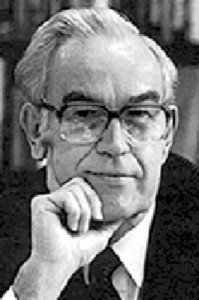 This idea that a bit of York can be found everywhere repeatedly finds backing.
Ernest Lefever, right, is a world-renowned scholar and founder of the Washington, D.C.-based Ethics and Public Policy Center. Lefever established the think tank in 1976 to “clarify and reinforce the bond between the Judeo-Christian moral tradition and the public debate over domestic and foreign policy issues.” (Former U.S. Senator Rick Santorum is a fellow with the center.)
And Ernest Lefever is a York native.
And he’s a Renaissance man with a mile-long resume.
From his bio:…

From 1964 to 1976, Dr. Lefever was a senior foreign policy researcher at the Brookings Institution. He has done research at the Johns Hopkins School of Advanced International Studies, taught at the University of Maryland, American University, and Georgetown University, and headed the Foreign Affairs division of the Library of Congress. He has lectured at the National War College, the Army, Navy, and Air Force War Colleges, the Japan Defense College, Moscow University, the Foreign Service Institute, and many American universities. In 1959-60, he served on the foreign policy staff of Senator Hubert Humphrey.

And he’s a collector of limericks. In fact, one of his 20 books is called “Liberating the Limerick”.
We’ll end with a couple of limericks from that book and a 2006 York Daily Record story on the collector:
God’s plan made a hopeful beginning
But man spoiled his chances by sinning
We trust that the story
Will end in God’s glory;
But at present, the other side’s winning.
— Oliver Wendell Holmes
St. Augustine thought he had found
The sin by which mankind is bound:
“It was not,” so said he,
“The fruit on the tree,
But the lust of the pair on the ground.”
–Bob L. Staples
From the YDR:

There once was a man from the Daily
Charged with writing about, mainly
An author from Chase
Not the run or the race
But the state of Maryland, plainly
Ok, so it’s not the dirty limerick some people may be used to; and for York native Ernest Lefever, that’s the exact point of his new book, “Liberating the Limerick.”
“Limericks can be funny without being dirty,” said Lefever, who now lives in Chase, Md. “Or they can be used to reveal important truths.”
Lefever, 86, has been writing and memorizing limericks since he was a little boy growing up in York from 1919 to 1940.
“I’ve always enjoyed the humor and the play on words,” he said. “So one day, I set about writing a book on the subject.”
For his book, Lefever and a small crew of family and friends, sifted through more than 9,000 limericks. In the end, they settled on 230, including some of his own, and divided them into 16 categories such as History, Politics, Celebrities and Sheer Nonsense.
Of course, it wouldn’t be a limerick book if there weren’t at least a little sexual innuendo going on in other categories such as Battle of the Sexes and Freudian Quips. But for the most part, Lefever wanted to showcase the cleaner, wiser side of the form.
“There’s nothing smutty in the book,” said the theologian who holds a doctorate in Christian Ethics from Yale University. “But there is a lot of fun and wisdom to be found.”
Lefever said he was drawn to limericks after reading the work of Edward Lear, (1812-1888). His nonsense verses and drawings entertained the children of then and now.
The invention of the limerick has been debated, but Lefever said they began during the Victorian Period in Great Britain.
Like a haiku, and other structured forms of poetry, the limerick has a relatively defined meter. There are five lines in which the first, second and fifth rhyme, and have eight or nine syllables.
The third and fourth lines also rhyme with a sound unique from the others. These lines are also shorter using five or six syllables.
But unlike haikus, which are generally accepted as poetry, there is also some debate as to whether limericks are poetic in form or simply literary in nature.
Local poet Carol Clark Williams, who helped form the group York Poets, votes no.
In addition to winning several state and local awards for her work, Williams has also published two poetry books, “Stories of the Tribe,” and “Music Lessons.” Both books have been “Endorsed for Merit” by the Pennsylvania Poetry Society.
“Real poetry is built on metaphor and offers universal truths that resonate in the reader’s mind long after the poem is read,” she said. “Limericks are mainly verses written for fun.”
Debberae Streett is a co-host of the bi-weekly, “Poetry Brew,” held at Sparky and Clarks in York. She also facilitates a poetry revisions group that has been recently published in the book, “Somewhere on George Street.”
Unlike Williams, Streett said limericks are a genuine poetic form.
“(They) have an easy rhyme scheme,” she said. “And limericks lend themselves to memorization.”
She said there is a challenge to the structure of limericks, but if done right, they can be very entertaining and make points the way other poetic forms do.
As for the author, Lefever said he does not believe limericks qualify as poetry.
“They’re verses,” he said. “But challenging verses that are a lot of fun to work with.”
(Ernest Lefever died in August 2009 in a Adams County nursing home. To read obituary story, click here.)