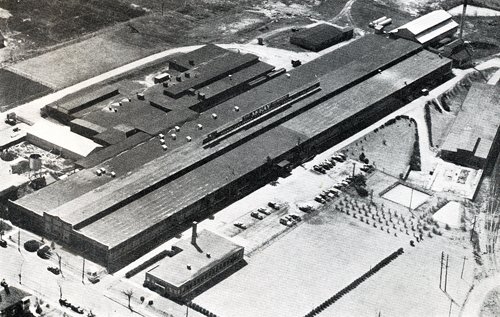 In 1975, Walter S. Ehrenfeld wrote ‘York’s Factory Whistles,’ which included scenes of York-area factories in the the first four decades of the 20th century. This view shows McKay Chain Co. Ehrenfeld work has gained new interest with the establishment of a fund to ensure the New York Wire factory whistle concert, an annual rite of Christmas in York County, will continue. Now, a granddaughter is looking for information on the Ehrenfeld family, still remembered and much respected in York County. Also of interest: New York Wire factory whistle: ‘The world’s loudest music without amplification from a non-musical instrument’.

Margo R. Harper lives in Virginia, but she has deep family roots in York County.

And she’s looking for them to grow deeper.

“Walter Spahr Ehrenfeld was my grandfather.  I have been researching the Ehrenfeld geneology back to the 1600’s.  I have articles and documents on York, PA written by Charles Hatch Ehrenfeld and Charles Lewis Ehrenfeld including newspaper clippings, wedding announcements and photographs of York, PA from the 1800’s. I also have several copies of the York’s Factory Whistle book and photos from Ehrenfeld Industries in York when it was first started.

“My mother, Mr. Ehrenfeld’s last daughter, turns 80 next month (in November).  I have found all these materials as I prepare for her 80th birthday.

“I saw your blog. I am thinking some of these materials might have historical significance to York, PA.

If you have further information of the Ehrenfeld family, please contact Margo: margo123154@yahoo.com.