Endangered pier aided York trolley runs to Elm Beach: ‘It must have been their Ocean City’ 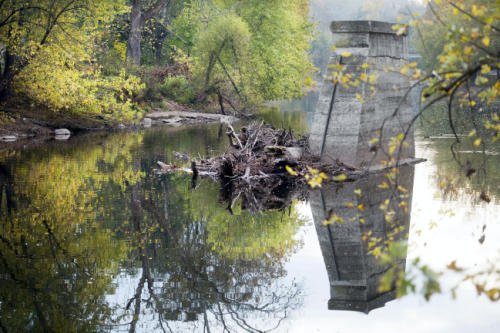 For years, this old pier has just been there, right in the middle of the Conewago Creek outside Manchester. It supported a trolley bridge for decades but then the service ended in the 1930s and so did the usefulness of the bridge. But when it was in play, thousands of picnic goers crossed the Conewago on that span to Elm Beach for a swim. Now this landmark is coming down – debris backs up behind it and risk takers use it for a diving board. This seems like a waste of $20,000, as some readers pointed out on the York Daily Record’s Facebook page.  Meanwhile, mention Elm Beach and you still get memories. ‘It must have been their Ocean City,’ a Newberry Township resident told the York Daily Record. For a photo gallery of the endangered old pier, check out: Conewago Creek. Also of interest: See photos of the pier with a trolley and a bridge to support.

York’s Vicky Moran is looking for a bit of help with a memory:

“It was probably between 1968 or 1969, and there were train tracks that ran alongside the New York Wire cloth (441 E. Market St.) and a large building that housed either a Murphy’s or a McCroy’s 5&10 and beside it was I believe was a movie theater. So one day a train either derailed or tipped and hit the side of the building and there was enough damage that the building had to be pulled down. I remember a lot of it because, while it was being razed the neighborhood kids including me would sort through the area looking for things that might have been left behind. Of course we weren’t supposed to be in the area and I ended up stepping on a nail and hiding the injury until I had the beginnings of blood poisoning, very hard to forget some details.

“To sum it up, I’d like to find a copy of the train accident in the old newspapers and fill in some blanks, like what was the name of the 5&10 destroyed and a little about the movie theater that sat beside it Can you help me pinpoint the date of the accident?”

+++
The story of another bridge, some miles north of York County: 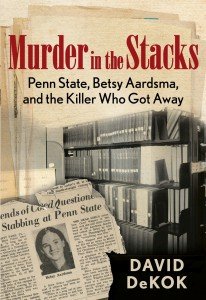 David DeKok’s new book sounds intriguing. The YDR’s Tom Barstow said this in a Books Buzz blog post:
‘The detailed look at Penn State makes the university a central character in the book, which describes how the library stacks were infamous for sexual trysts among students and non-students. DeKok’s thorough research also raises a number of questions that Penn State and state police authorities should address.’ 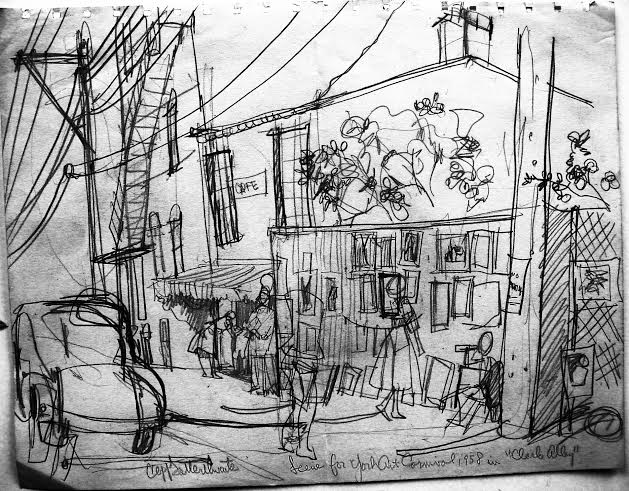 They had art shows in alleys, not so long ago, as Cliff Satterthwaite portrayed in this 1958 drawing. This is the ‘before’ drawing. The ‘after’ is below … . 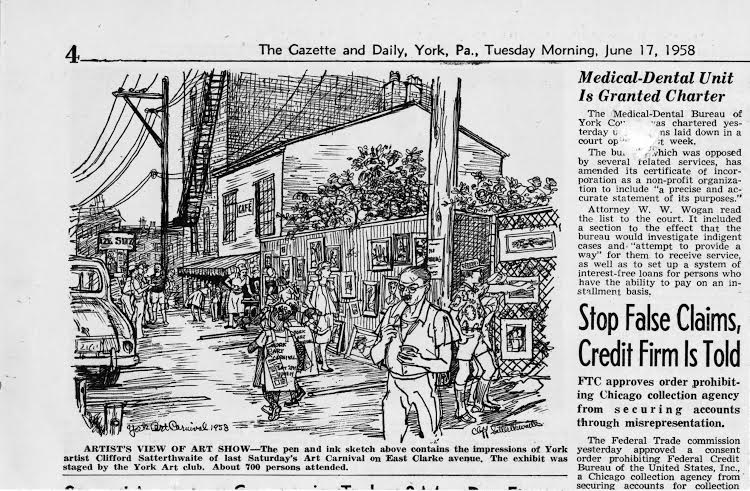 This is how the art show was presented in The Gazette and Daily. Cliff Satterthwaite will be in town for a reception from 4-6 p.m. on Nov. 15. If interested in meeting the man who documenting so much of York County for decades, contact Elizabeth Stein. For more of Cliff’s work about York, see the Satterthawite category.