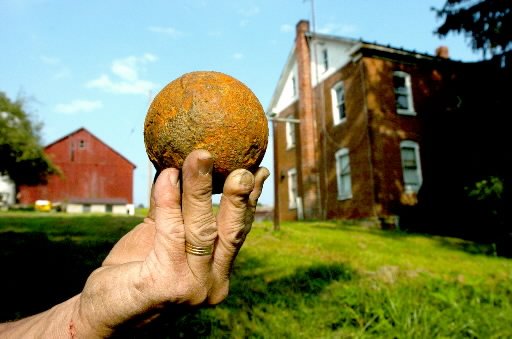 Mary Ann Furnace, an early York County iron furnace, operated in West Manheim Township starting in 1762. Among other things, the furnace produced grape shot and cannon balls for the Continental Army during the American Revolution.
The furnace is long gone, but its site will become part of Codorus State Park. The York County Farm and Natural Lands Trust paid $1.75 million for the land, and the state will pay back the loan by March.
All this will shield the historic site from the developer’s bulldozer.
What is the 1762 furnace’s place in county history?
The following from “Never to be Forgotten” gives a glimpse:

“George Ross of Lancaster County and Mark Bird of Philadelphia construct Mary Ann Furnace, four miles south of Hanover. Three years later, William Bennett builds Codorus Furnace in Hellam Township near where the Codorus Creek empties into the Susquehanna. James Smith, prominent lawyer, later operated the furnace. Interestingly, Ross and Smith, both signers of the Declaration of Independence and members of the Continental Congress, held financial interest in early county iron furnaces. Workers at both furnaces backed America’s Revolutionary War efforts. The furnaces heated iron ore — often mined from county soil — to make cannonballs and other armaments. In the 20th century, a large quantity of balls was found at the Mary Ann Furnace site, ranging from small rifle balls to 4-inch cannonballs. Nothing remains of Mary Ann Furnace today, other than some cinders. Codorus Furnace is the oldest remaining landmark of the iron industry in the county. The site is located about two miles from Route 24 in the Starview area.
Mary Ann and Codorus furnaces, as well as other furnaces dotting the county, were on the receiving end of the iron ore mined from Potosi and other such sites throughout the county.

More on Mary Ann Furnace, from a recent story in the York Daily Record, below:

Fifty-four years ago, when Terry Rummel was 6 years old, he and his family moved onto a historic tract of land in West Manheim Township. During the years, the land had been many things to many people.
But in Rummel’s lifetime, the farm that was once leased to Declaration of Independence signer George Ross was simply home.
In the middle of December, the state struck a deal to acquire the 117-acre farm for $1.75 million. It will be added to the 3,329 acres already belonging to Codorus State Park.
“My father (Lloyd E. Rummel) did not want to see it developed,‿ Rummel said.
Still, there was pressure on the Rummels and the park to strike a deal quickly.
When Lloyd Rummel died in March at the age of 84, his six children needed to pay off nearly $240,000 in taxes. Terry Rummel said the family had until about the middle of January to come up with the money.
Terry Rummel said there were at least two offers for the property worth more than what the park was offering that would have settled the tax bill and profited the estate.
Despite the larger offers, Rummel and his siblings, Jimmy, Rick, Wayne and Lisa Rummel, along with sister Bonnie Long, wanted to accept what the park could afford; well, almost afford.
York County Farm and Natural Lands Trust obtained a short-term loan to buy the farm on Tuesday. The state will reimburse the trust by March.
“I think things worked out for the best for all involved,” Rummel said.
For Vince Peterson, Codorus’ assistant park manager, the acquisition is about more than adding space. It’s about preserving a historical treasure.
Around 1762, Ross, one of nine Pennsylvanians to sign the declaration, established the Mary Anne Furnace on the property. At first, the furnace was used to produce basic products such pots, pans and ladles.
But during the American Revolution, the furnace produced cannon balls and grape shot for the Continental Army under the command of General George Washington.
As a boy, Rummel often found leftovers of the heavy round weapons.
“But my father didn’t usually let me keep them,‿ Rummel said with a laugh. “He took them and gave them to friends.”
Still, he did manage to find and keep some relics, which he showed during a walking tour Friday afternoon with Peterson and fellow park manager Warren Werntz.
After the cannon balls were produced, they were examined for defects, Rummel said. Those that did not make the grade were stacked along a stream that ran through the property.
In time, many of the piles collapsed and were washed away down the stream. Some, however, remained out in the open and made easy pickings for the Rummel children.
To this day, there may still be relics buried under the muddy stream water that still runs through the property.
But Werntz said it is now a crime to remove anything of historical significance from the property.
“We will be observing the farm closely,” Werntz said. “And we will pursue these matters to the fullest extent of the law.”
The original home was off limits during the tour. But Peterson said the 2 1/2-story brick house, with a partially submerged lower level, represents typical 18th-century design.
Rummel said the rooms were small and the house, which was mostly heated with wood, was always cold.
Life on the farm wasn’t easy. Even on a sick day when Rummel was home from school, he said, his father wouldn’t hesitate to put a shovel in his hands and send him to the barn to shovel cow manure.
There were also pigs, chickens and ducks that needed to be tended in between the planting and harvesting of hay, corn and wheat.
As difficult as it was, Rummel reflected fondly about playing hide-and-go-seek and sledding on roof tins on one of property’s many steep hills.
Some of those tins may have been used on the roof barn, which Peterson estimates was added to the property in the early 1800s.
Someday, Peterson and Werntz hope to have barn dances to raise money for the property’s restoration and preservation.
“We’ve already formed a group called, ‘Friends of Codorus State Park,’‿ Werntz said. “We have 52 members and are looking for more.”
Membership is free. 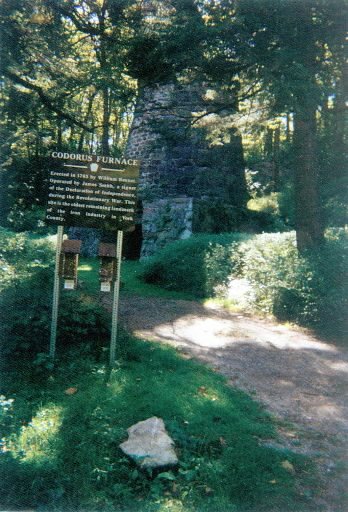 Codorus Furnace stands near where Codorus Creek flows into the Susquehanna River in eastern York County. A predecessor to this furnace was owned by Declaration of Independence signer James Smith in the 18th century.