York, Pa.’s, Edgar Fahs Smith Middle School is a favorite site for crowds to gather to watch July 4 fireworks at the York Expo Center. Background posts: York County … ‘A smorgasbord of architectural styles’ and Smith students watched skies in WW II and Sports books focus on York High Bearcat boys.
Edgar Fahs Smith Middle School and McKinley Elementary School were the first two York City schools to close because of swine flu concerns.
The name of McKinley is easily traceable to the President William McKinley, who had York County roots.
But Edgar Fahs Smith. Who was he? … .

He was a University of Pennsylvania academic, born on the banks of the Codorus Creek.
So says a short bio in George Hay Kain’s “A History of York County Academy.”
The book, published in 1953, says that Smith (1854-1928) was probably the most distinguished alumnus of York County Academy, a forerunner of York College of Pennsylvania.
He graduated from Gettysburg College and the University of Gottingen and taught chemistry at various colleges, with his last 30 years at the University of Pennsylvania. He served as provost there from 1911-1920 and was considered one of the most eminent chemists of his day.
The bio tells of his many honorary degrees and awards and memberships in prestigious societies.
He authored 13 chemical textbooks, including the most widely read – “Electrochemical Analysis.”
His research included the use of tungsten in electric light bulbs and the use of molydenum in the steel industry.
“He was a great teacher,” the bio states, “and many of his students became eminent teachers and experts in scientific fields.”
These accomplishments put forth his name on the side of the York school in 1931, built on land once owned by his father, Gibson.
– This post is part of series about the names on buildings in York County. For others, click here. 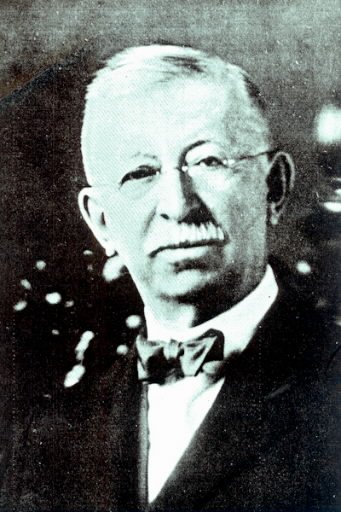