York’s East Side district: A little industrial, some residential, a bit of history and several notable people 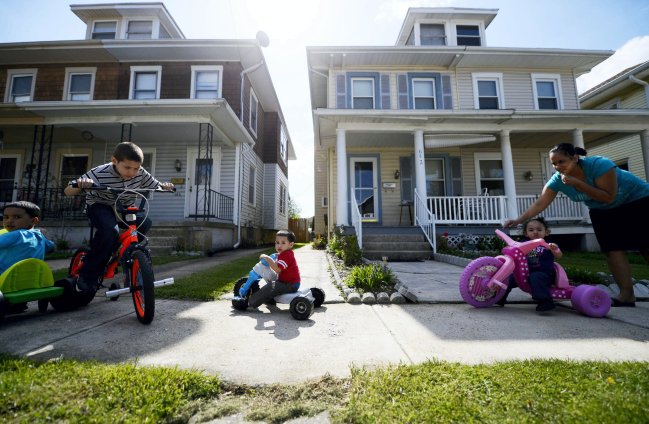 This is Dallas Street in York’s East Side district. And that’s Jasmyn Figueroa, right, whose family moved to this neighborhood  from West Market Street. A York, Pa., Daily Record story on this district explains that the family needed more space. She likes the change: ‘It’s quiet, you don’t hear noise or people fighting.’ She used to live near a bar, and this neighborhood suits her family’s needs. ‘I feel safe here.’ To see the length and breadth of this East Side area – one of many York neighborhoods covered as part of the ‘Fixing York’ series – check out: Interactive map.  Also of interest: Long ago, East Side, parts known as Freystown, served as home of Pfaltzgraff pottery.

Something that struck me after reading Dylan Segelbaum’s story on York’s East Side district was the number of well-known people who have lived there.

And some of the well-known stories from York’s past that have happened there.

York has produced many players on the local and national stage, and they obviously come from some neighborhood.

Interestingly, for a district that has produced big names, this section of the city has no established neighborhood association to reinforce its identity, the YDR story explained.

Here’s a sampling of local and national names identified with that district:

Refindings is a private business of old and often valuable items awaiting buyers. The architectural warehouse sits in the East Side district on the 400th block of East Prospect Street.
+++

John Wilkes Booth: For a short time in 1853, Booth attended a private boy’s school on East Prospect Street (then Plank Road) called Bland’s Boarding Academy, or the Sherwood School. It was almost right across from where Hannah Penn K-8 now stands.

Chris Doleman: Doleman, a graduate of William Penn Senior High School, was the first person from York County to make it into the NFL Hall of Fame. An eight-time Pro-Bowler, Doleman played from 1985 through 1999 with the Minnesota Vikings, Atlanta Falcons and San Francisco 49ers. He grew up on East Prospect Street near Lamour Street, where there’s now an honorary sign in his name.

Voni B. Grimes: The York community leader is known for his advocacy of youth and education, along with the gym that bears his name. He used to live on Susquehanna Avenue near what’s now the Community Progress Council building.

The Maryland and Pennsylvania Railroad tracks – after some 77 miles running through rural York County and northern Maryland – move through the urban East Side district. For a tour of the area via the lens of York Daily Record photographer Kate Penn, check out this MediaCenter gallery.

The YDR story also covered a bit of history about that area:

• Before it was relocated in 1888, the York Fairgrounds used to stretch down to East Prospect Street.

• The Girarders, one of the gangs that sparked the race riots in 1969, came from the area around Girard Park.

• Until 1989, York Peppermint Patties were made in several buildings on South Pine Street near East Boundary Avenue.

He has a question about this East Side intersection and another possible former well-known resident:

‘At the corner of Pine and Poplar was a Barber Shop called Rosie’s. It’s owner was the father (of) Julius LaRosa, a famous personality and accordion player who appeared for years with Arthur Godfrey. As told to me by my father.’

If you have insight about Julius LaRosa and his link in York, please comment below.