Drenched, Part Last: Check out these Storm of September 2011, links to stories, photographs 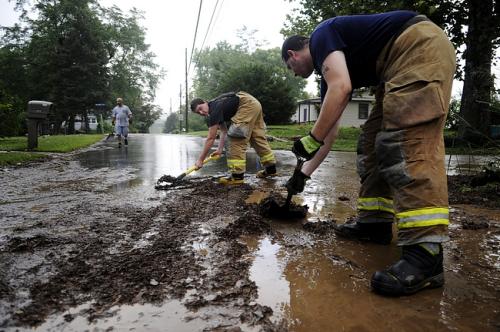 East Prospect, Pa., firefighters scoop up mud left by September Storm floodwaters on Front Street in Wrightsville. (See additional photograph below.) The headline on a York, Pa., Daily Record/Sunday News article about possible severe damage in Wrightsville tells the story of the weekend:  ‘Secondary crest’ of Susquehanna didn’t happen because storms didn’t sync up. Also of interest: All bad weather posts on yorktownsquare.com from the start.

This year, York County and its region have weather the effects of an unusual number of tornadoes, an earthquake, a near-miss tropical storm and a well-aimed tropical storm.

Before we conclude that the sky is falling or the end is near, consider weather events in 1822.

In the spring, a terrible flood swamped York and environs. Then a drought set in that left creekbeds dry.

As I wrote in the post  York County residents passed through fire and water, or water and fire, in 1822, that challenging year serves as a reminder that unpredictable, painful weather patterns have afflicted York County – and the nation – since its earliest years… .

– For photos and a story wrapping up Saturday’s flood news, check out: Wrightsville resident after flood: It could have been much worse.

– Check out these photos submitted by readers of flooding and cleanup.

– The attention of York countians is also on the 10th anniversary of the 911 attacks and the York Fair. 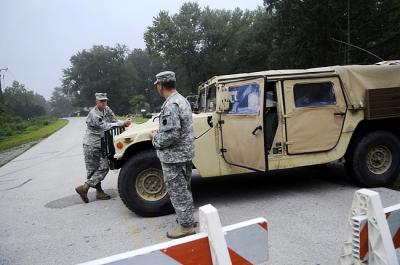 National Guardsmen were visible in Wrightsville over the weekend. Walter Nace, among others, appreciated their presence.   ‘It made us feel like somebody was watching over us,’ he said.