Drenched, Part II: Check out these Storm of September 2011, links to stories, photographs 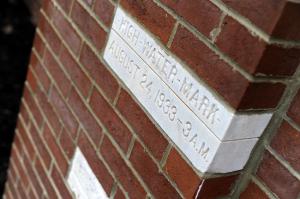 The York County Regional Charter School, in the old Smyser-Royster foundry, is newly renovated. And that rehab work took care not to erase the white etching marks showing high-water points from the flood of 1933 and 1884 on its facade. Also of interest: Drenched links, Part I.

– Comparisons with Tropical Storm Agnes in 1972 continue to come in: Storm draws parallels to Agnes.

Excerpt quotes York City Council President Genevieve Ray: “While both storms dumped a large amount of rain on the area, there have been signs all around the community that the flooding will not be as bad, Ray said… .

“For others it’s the steps of the YMCA of York and York County on Newberry Street, where Ray recalled the water lapped up to the third step of the entryway. But most iconic for Ray was the Market Street bridge. Water completely covered the expanse during the aftermath of Agnes, but still flowed beneath it following the recent storm, she said.”

– The York Daily Record’s roundup story, including news of a storm-related death:

– See this TV video of the loss of a historic covered bridge in Lancaster County.

– On the lighter side, if you want to see what acts performed at the York Fair in the flood years 1933 and 1972, visit: Performers. Teaser: Sonny and Cher was one act.