Pennsylvanian Daniel Drawbaugh: ‘The Edison of the Cumberland Valley’ 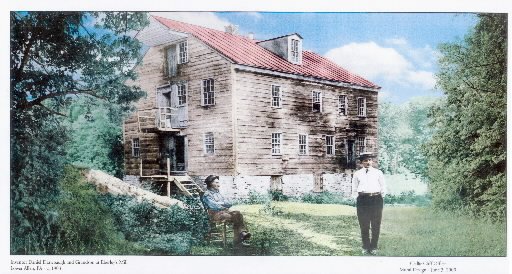 Inventor Daniel Drawbaugh and his grandson are depicted at Eberly’s Mill, circa 1903, in this Metro Bank mural. Metro Bank captures images of events and sites of significance near its offices and reproduces them as murals on their office walls. Also of interest: Metro Bank murals draw you in.

The Drawbaugh family is another accomplished Dover-area family .
Well, its most prominent member, Daniel Drawbaugh, actually lived in Cumberland County’s Eberly’s Mills, which isn’t exactly Dover.
But give me a little geographical license and look in the phone book at all the Drawbaughs in the Dover area, and you’ll see why “The Edison of the Cumberland Valley,” can be claimed by Dover and the entire northwest sector of York County.
Inventor Daniel was engaged in legal fisticuffs with Alexander Graham Bell over rights to the telephone, as this story in “Never to be Forgotten” attests:

Daniel Drawbaugh, “The Edison of the Cumberland Valley,” gained a patent for a barrel stave jointing machine in 1851. His last patent is for a coin sorter in 1911. In his long career as a craftsman and inventor, the Cumberland County man’s most significant contribution — or perhaps it is a personal failure — is his work with a primitive telephone. A Drawbaugh-designed telephone reportedly works a decade before Alexander Graham Bell said to his assistant in 1876: “Mr. Watson, come here, I want you.” Drawbaugh, Bell and other inventors fight for the patent after Bell’s well-publicized success. The U.S. Supreme Court decides in Bell’s favor by a 4-3 decision in the 1880s. His detractors argue that Drawbaugh is a trailer of inventions, an imitator not an inventor. So Bell’s name becomes attached to the discovery of the phone, and Drawbaugh continues his struggle as a small-town inventor. “No one can say with authority that the ‘Wizard of Eberly’s Mills,’ did antedate Professor Bell. The Supreme Court, by a one-vote majority, said he did not, and who can argue with the High Court?” Drawbaugh’s biographer asked. Eberly’s Mills is located across the Yellow Breeches from York County, and Drawbaugh experimented with some of his inventions in the county. He also married Elsetta J. Thompson, daughter of a state representative from York County, in 1854. Many of his surviving York County relatives attended a ceremony to dedicate a historical marker located at the site of the inventor’s workshop and home in 1965.