Draft horses have been part of York County, a mega-agricultural region, from its founding in 1749. And they’re still around, although not generally used for heavy agricultural purposes. Well, maybe York County’s  Amish use them for traditional farming purposes. Ydr.com’s  ‘The expense of caring for draft horse’ tells about a Springfield Township family that loves its big horses: ‘Kristen Thomas laughs when she tells folks how her dad came to own draft horses.’ ‘He always wanted elephants when he was little,’ she said and giggled. ‘The closest thing he could get to an elephant was a draft horse.’ Oh yes, how much does a draft horse eat? The story’s subhead answers that question: ‘One can drink 10 gallons of water and eat an entire hay bail in one day.’ (Click on this image to see other draft horse photos. Also, see photographs of an ornate cavalry saddle below.) York County celebrity horse Smarty Jones: ‘Bigger than a giraffe’.

The saddle Hellam Township’s Stacey Myers discovered at an auction probably never sat on the back of an ancestor of the Thomases’ draft horses.

So we have the tale of two horses in this post. 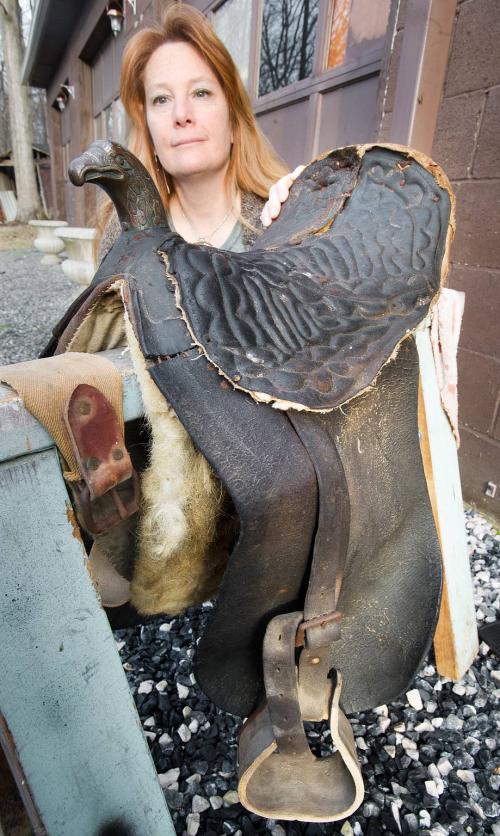 Stacey Myers found this saddle for $7 at an auction. It might have been made in Philadelphia. Notice its ornate design, with its eagle head and stitching suggesting an eagle’s wings. Read more about this saddle at: antique saddle.

The draft horses, bred for hard field work, who helped make this country great and bountiful. They served as prototypes of tractors and automobiles and were as important to families then as motorized vehicles are today.

And cavalry horses, those thoroughbreds who gained an unfair reputation for the good life. But of course, cavalry horses carried military men who helped serve and protect this nation.

And we shouldn’t forget the often short lives of these fast horses. Sometimes, they covered 50 miles a day or more on forced marches. And they carried warriors into battle, subject to the same dangers from rifle and canister shot as their riders.

Take the aftermath of the Battle of Hanover, a cavalry clash, for example. Both sides sustained 300 casualties, dead, missing and wounded. Many of their mounts ended up dead or wounded as well. In the cleanup after the fight on Hanover’s streets just before the Battle of Gettysburg, civilians had to move the dead horses to open spaces where they were burned.

So, both horses have stories, and both those stories have importance in our history. 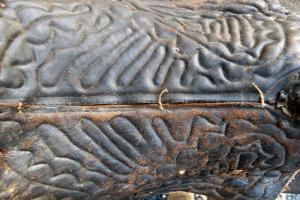 A closer look at the stitching.