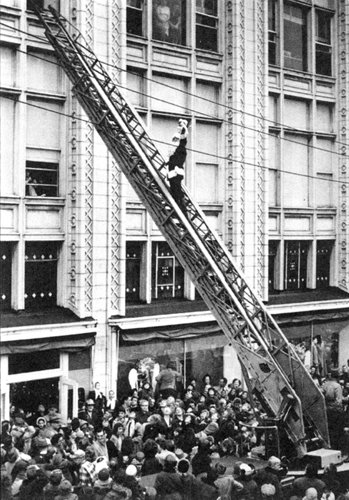 Notice in the photo the two women looking down on Santa as he climbs up the ladder on his annual visit to the Bon-Ton and downtown York, Pa. Background posts: Ho, ho, ho – uh, Santa, hold on, The Grumbachers: ‘Builders and Heroes,’ Part III and What was famed architect John Dempwolf’s own house like?

In plain view: This photo captures the excitement of the downtown holiday shopping season in post-World War II York. Every year after Thanksgiving, Santa made his visit to York’s bulging downtown. He flew into the area by plane, and later, helicopter and parked his sleigh outside city limits. A fire truck escorted him to the downtown. As part of the advent of the holiday shopping season, York’s big three department stores – Bon-Ton, Bear’s and Wiest’s – competed for window decorating prizes.
Behind the scene: The 1950 census placed the City of York at just shy of 60,000 as military men and women came home, married and started families. These were the magic years for the downtowns in York and across York County. Subsequent censuses would show declines in York’s population as the city ran out of room and residents soon found the suburbs. Today, the population of the city is slightly above 40,000.
Further details: This photograph, courtesy of Bon-Ton, was used as a closing image in James McClure’s “Never to be Forgotten.”
Posts in this series:
– 400 years ago, John Smith explored Chesapeake Bay – 1/31 iconic images
– Declaration signer James Smith tops York County patriot list – 2/31 iconic images
– Going to market a longtime York County pastime – 3/31 iconic images
– William C. Goodridge: From slavery to success story – 4/31 iconic images