How Downtown Jacobus changed in the 1980s 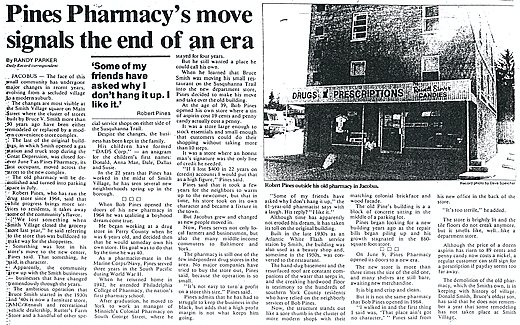 Some folks remember when Pines Pharmacy was located in this old building in Jacobus. By old, this building, as noted in this York Daily Record story, was the last of the buildings on Smith Village square, a cluster of stores built by Bruce V. Smith in the 1930s, not long after Jacobus became a borough along the Susquehanna Trail in 1929. Pines was the last occupant of this last building, which was later demolished. That site became a parking lot, and Pines opened across the street in a convenience-story complex, marked by Rutter’s today. Smith Village today is highlighted by, well, Smith Village’s spacious furniture store. Btw, Jacobus is the county’s newest borough, followed by Yorkana, Mount Wolf and Hallam. Also of interest: Richard Nixon’s visit to his namesake park, near Jacobus, sparks memories.

As a side note to the Jacobus story above, the borough’s own Randy Parker freelanced this story for the York Daily Record, one of his early stories.

Fighting men & their watches: The National Watch and Clock Museum’s exhibit are always appealing, beckoning people across the Susquehanna River to its Columbia site.

The exhibit will demonstrate how fighting men rely on their timepieces.

“This exhibit will present the personal timepieces of those who have served their countries throughout the last 250 years. Through their timepieces, and their personal stories of service, visitors will obtain a greater appreciation for the technological development of these timepieces as well as the significance they had for the wearer. Watches currently scheduled to be exhibited include George Washington’s pocket watch, spy and author Ian Fleming’s wristwatch, and many more.”

The exhibit also offers the opportunity for folks to exhibit their personal watches. For info, please email: museumoftime@nawcc.org

Digital leader: Randy Parker, mentioned above, wrote an interesting on YDR Insider whose headline raises a big question: Can newsrooms help lead a digital first transformation throughout the community?

Forum of the day: Prudomme’s, a Columbia restaurant just across the Susquehanna River bridges, has been flooded with support after an atheist complained that a 10 percent discount the restaurant offered for those who presented a church bulletin on Sundays was discriminatory. See this ydr.com story. What’s your view? Is such an offer discriminatory? Please comment below. York County experienced such a moment 100 or more years ago, of a sort. Read more: Residents did not ‘admire’ York County village named after atheist Voltaire .