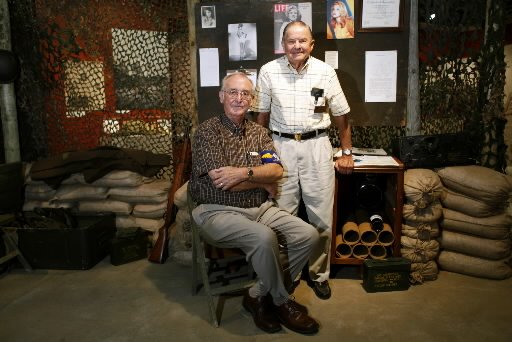 A researcher is looking to add to the story of a York County World War II veteran William ‘Shorty’ Burhans, whose plane was downed in fighting. He and other crew members floated in the China Sea for 4 1/2 days before a friendly submarine rescued him. Here, Dick Benner of Hanover, Pa., and John Wolfe of West Manchester Township, Pa., two other local World War II vets, sit in the command post area of York County Heritage Trust’s exhibit ‘Front Porch to Front Lines‘. Benner and Wolfe volunteer as guides  for the exhibit. Part Last: One shell, 2 brothers die – Scholarly York County history journal feeds your sense of discovery

Larry Miller, lmiller4@comcast.net, finds the story of World War II hero William Burhans compelling, as told recently in a York Daily Record story. He’s so interesting that he will be in York soon to interview Shorty, as the old gunner is called.

“I will be interviewing William Burhans, the B-25 gunner who was shot down over the China Sea, within the next two weeks and would like to get a few more vets from the York area while I am there,” he wrote.

I wrote back (edited here) with a few leads, with a diversity emphasis. They might interest other researchers, too:

– The Heritage Trust just opened a new exhibit of 20th century wars. Lots of vet groups have gone throug. Dan Roe, droe@yorkheritage.org, could aid you in this.
– Voni B. Grimes has out a short autobiography about, among other things, his experiences serving as a black man in WWII. He’s in the phone book, easily reachable.
– Jerry Cohen is the sole remaining member of the local Jewish veterans unit. He’d be available via Temple Beth Israel.
– One often overlooked vet who has a great story to tell is Dick Boyd. His autobiography touches on his Battle of the Bulge experiences among other things: .