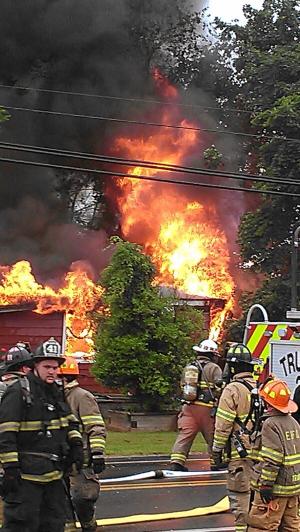 This explosion and house fire along Carlisle Road last week captured the attention of the York community. The Dover Township, Pa., structure went up with no loss of life. It was next to a vet’s office – remembered by many as the former home of Waltermyer’s flooring – but no one and no pets were injured there either. This is not the first time a house exploded around York County. (See video below.) Also of interest: A 1998 explosion rock the then-York International plant, killing one. and Stories and photographs about major fires in York County’s past.

It’s not until you look back at history and then add up the list of home explosions around York County – as ydr.com did last week after the Dover Township explosion – that you realize that we’ve had a few – a few too many.

Often, the source of the blast is never determined.

Here’s that list, which will no doubt prompt memories:

March 10, 2007: An explosion rocked the 900 block of West College Avenue in York. It damaged at least five homes and injured several people. No cause was determined.

Feb. 28, 2007: A York Township home at 2433 S. Queen St. exploded, leveling the home and later igniting the remaining debris. No one was injured.

Columbia Gas officials traced the explosion to problems with a pipeline near the home. It had to be completely replaced along Memory Lane from South Queen Street to School Street.

In the days after the blast, gas service was returned to all existing homes except the fire-damaged house next door to the one that exploded.

Aug. 4, 2003: Francis Thompson left his home in Hopewell Township for a golf game. As he sat in his car with the key in the ignition, he heard a gigantic explosion and watched the four sides of his home blow apart. It could have been a 200-pound propane tank, the fire chief said. AmeriGas hired a fire investigator to locate the cause.

Feb. 12, 2003: Gas from an underground leak drifted into houses through foundations on Circle Drive in Jacobus. About 4 p.m., Chris and Amy Krichten’s house at 6 Circle Drive exploded. The couple and Amy’s children, Josh and Megan Luckenbaugh, and a visiting friend, Ted Hake, escaped with their lives. The blast sparked a blaze that destroyed the house and vehicles.

Chris, Amy and Megan spent time in the Bayview Burn Center in Baltimore. Josh and Hake suffered no injuries.

Jan. 11, 1990: A home at 1117 S. Albemarle St. in Spring Garden Township blew up 30 minutes after a caller reported the smell of gas in the area. The explosion occurred minutes after the home had been evacuated. The blast and its ensuing fire razed the home of Brian and Tracy Smith. No one was injured.

1974: A gas explosion ripped through a house at 1325 Ogontz St. in Spring Garden Township. A woman jumped to safety from a second-floor window, but her 87-year-old father-in-law died in the basement.

All stories and photos about pain and trauma in York County from the start.

This video captures the scene of the Dover Township house explosion last week, including the recovery of an artifact of value to the family. As an update, the home is being secured so it will be safe to enter for investigation.