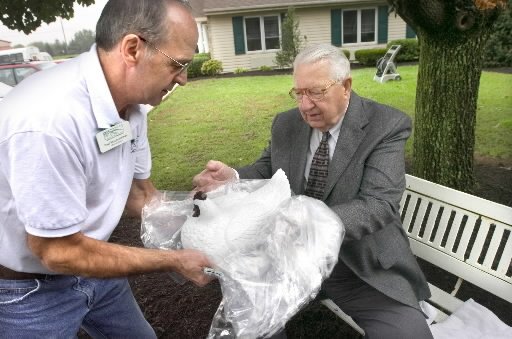 In this 2004 photo, George Leader hands an ornamental chicken to Paul Masenheimer, who painted his nursing home – Providence Place – in York County’s Dover Township. Leader bought the chicken to place outside the nursing home and to serve as a reminder of the link between chickens and the Leader family. His father was a renowned chicken breeder, and Leader began his career running a chicken hatchery. Background posts: Author muscles way into York’s weightlifting, bodybuilding world and Gov. George Leader cleared dam plan.

York County Register of Wills Bradley C. Jacobs, a Dover-area native, pointed to several achievers to add to those that I pointed out in my column, Dover home to many achievers.

He particularly pointed to George Leader, the only Pennsylvania governor to come from York County. Leader grew up in York Township – Leader Heights. But after serving in World War II, Leader operated a chicken hatchery in Dover Township. That was his day job as he launched a political career… .